It's common knowledge I'm an old Hongkongese. No, I don't hail from there but I've been an aficionado of their cinema for almost twenty years! And amongst the different HK film genres I enjoy three genres in particular; the dark and nasty horror films of the 80s (Seeding of a Ghost, Black Magic I + II, The Rape After, etc.), the heroic bloodshed films (A Better tomorrow I + II, The Killer, + 6 tons of copy cats), and last but certainly not least; the Girls kick ass genre, also known as the Girls with guns genre. In other words; the "Girls kick ass, shoot guns, and look cute" genre!!! LOL.

There are quite a few entries to the genre but the pinnacle to most fans is the ANGEL series. In their Westernised form retitled Iron Angels, and in northern Europe they're known as Ultra Force.

The first film in the series is great, the sequel is awesome, and the third one is... different, haha (it's more of a Spy/James Bond'ian film than a shoot 'em up extravaganza). 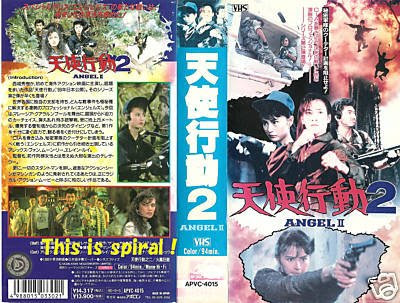 Unfortunately, until recently all three films were quite difficult to find in proper versions, either they're fullscreen, cut, or dubbed in English. The first film in the series was finally released on letterboxed HK DVD recently. Unfortunately, it's (slightly) cut. Very annoying!!! I have a handful of different version and today I received yet another one, finally a letterboxed uncut version. And the release you ask? Well, Japanese VHS of course! Haha.

I'm also the happy owner of the Japanese VHS for the sequel which sadly is only out on DVD as a cut, German dubbed DVD! For the third entry to the series there is a DVD in the US but it's both fullscreen and dubbed. Boo-hoo. As far as I know the only proper, letterboxed release is the Japanese VHS - which I unfortunately lost on the same auction where I won #1 (more and bigger BOO-HOO!). 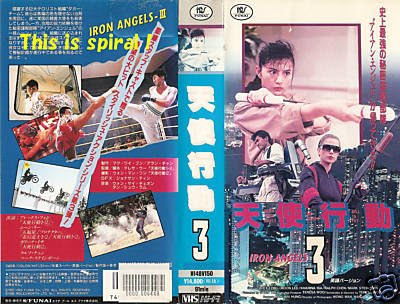 PS: Incidentally, another Danish blog wrote about ANGEL just a few days ago.
Posted by Jack J at 5:56 PM 2 comments: Links to this post

this is﻿ the coolest thing ive ever heard

PS: If you don't usually read these kinds of interviews with publishers cos none of 'em tell it to you straight... then this is the interview you OUGHT to read. Our friend Bill spills the beans like it is!
Posted by Jack J at 12:36 AM 12 comments: Links to this post