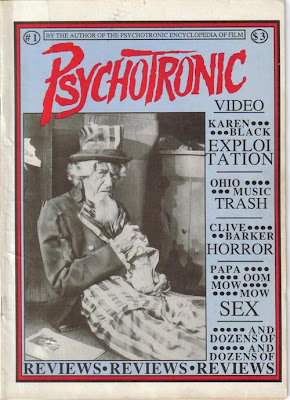 I still remember the evening in 1989 when I bought my first issue of Psychotronic Video. It was at Tower Records in Piccadilly in London. The issue was #3 and I immediately recognised that here was a grand genre film magazine done by a true fan (i.e. Michael Weldon). I'd never before come across a mag that heralded the trashier but non-horror films. But this was it!

And now, more than 20 yrs later, I've finally got hold of #1! Well, that is... I haven't actually GOT it yet but I've certainly WON it on eBay at the VERY, VERY affordable price of 18 dollars and 50 cents! If you think that's expensive then try and check out how much the other (few) copies currently retail for: One copy has a "buy now" price of $60 and another one of $95!! Yeah, I'd say 18.50 bucks was a strike of bloody luck (probably due to people in the rest of the world being asleep). Obviously, I'm crossing my fingers the postman isn't gonna chuck it at the bottom of this mail bag or some such. :-/

I kept buying Psychotronic for many, many years to come but lost interest about 10 issues before Michael Weldon closed the mad. I probably didn't have much money (no news there!) and there was too much of the contents I just didn't care about. Maybe I ought to get hold of them before they too disappear.

When I published the debut issue of my first fanzine, Banned in Britain, in 1994 I sold a pile of copies for destribution to Thomas Eikrem who was running his Rage distribution in Norway at the time (Rage was both a film mag and a distro. And I've just discovered he's still doing the mag! More on that later). The deal was I could choose stuff from his distro in return. I got a book and a couple of fanzines. That book was the original first Psychotronic book, The Psychotronic Encyclopedia of Film.

And I'm happy to report it's still here with me and still my favourite reference book. Yeah sure Weldon did another volume but I never thought it was as good as the first one (but needless to say I do own a copy of course. Thanks to Michelle Gilchrist of Melbourne who got me The Psychotronic Video Guide and the Mondo Macabro book in one helluva combined Christmas/birthday present in the early 2000s. Thanks!). I think there was talk of a third volume at some stage and I would certainly love to see one. Weldon has now a Psycotronic website but its leading a pretty stilleben life, unfortunately. I wonder what else he's up to these days.
Posted by Jack J at 11:49 PM 14 comments: Links to this post

THE CURE doing JOY DIVISION'S "Love Will Tear Us Apart".
Posted by Jack J at 9:47 AM No comments: Links to this post 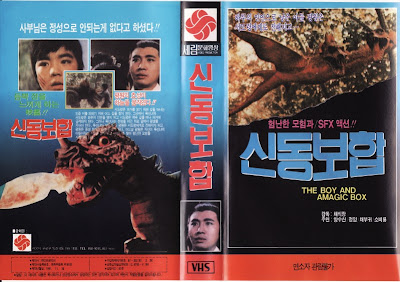 Unfortunately, this tape isn't mine but belongs to Matt of Cinehound forum (who lives in Korea and does the Unknown Kino blog) and I don't have a copy of the film either but it looks cool (well, cheesy!).

I copied the video clip from the uber cool world-weird film site TARSTARKAS.NET and I urge you to go and read their review here.
Posted by Jack J at 6:58 AM No comments: Links to this post