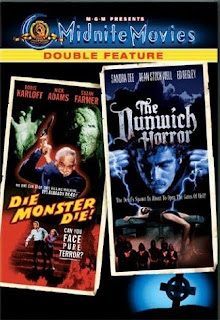 I dig complete lists so here's another one; It's the complete listing of all films that MGM have released in their awesome Midnite Movies series. The list comes courtesy of Bill Piper of Dvdmaniacs forum and the notes in the list are his too.

These DVD's are all great and anybody interested in horror movies ought to check them out. Unfortunately some of them are way out of print (the Reptilicus DVD I mentioned in the previous post is part of this series and is sadly OOP).

11: The Comedy Of Terrors/The Raven
12: Countess Dracula/The Vampire Lovers
13: The Haunted Palace/Tower Of London
14: The Tomb Of Ligeia/An Evening Of Edgar Allan Poe

15: The Abominable Dr. Phibes/Dr. Phibes Rises Again
16: Attack Of The Puppet People/Village Of The Giants
17: Beach Blanket Bingo/How To Stuff A Wild Bikini
18: Beach Party/Bikini Beach
19: Count Yorga Vampire/The Return Of Count Yorga
20: Empire Of The Ants/Tentacles
21: The Fall Of The House Of Usher/The Pit And The Pendulum
22: The Ghost Of Dragstrip Hollow/Ghost In The Invisible Bikini
23: The Incredible Two-Headed Transplant/The Thing With Two Heads
24: Invasion Of The Star Creatures/Invasion Of The Bee Girls
25: The Land That Time Forgot/The People That Time Forgot
26: Monster That Challenged The World/It! Terror From Beyond Space
27: Strange Invaders/Invaders From Mars
28: Theater Of Blood/Madhouse
29: The Wild Angels/Hell's Belles
30: Wild In The Streets/Gas-s-s-s!

39: Crystalstone/Boy and the Pirates, The
40: Fortunes of Captain Blood/Captain Pirate

41: Beast Within, The/Bat People, The
42: Blueprint for Murder, A/Man in the Attic
43: Chosen Survivors/Earth Dies Screaming, The
44: Devils of Darkness/Wichcraft
45: Gorilla at Large/Mystery on Monster Island
46: House on Skull Mountain, The/Mephisto Waltz, The
47: Konga/Yongary, Monster From The Deep
48: Phantom from 10,000 Leagues/Beast With A Million Eyes, The
49: Return Of Dracula/Vampire, The
50: Tales from the Crypt/Vault of Horror

The following are Midnite Movies not yet paired with another movie on
a MM double-feature disk:

EDIT: I've noticed the following four titles were ONLY part of the Midnite Movies line on VHS: Pajama Party, Frogs, A Bucket of Blood, Burn Witch Burn.
Their DVD counter parts are ordinary MGM releases that don't carry the cool MM logo on the front.
[Jack] 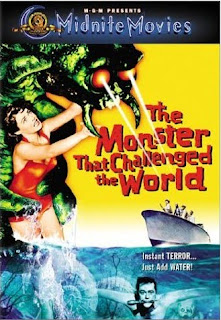 Thanks to Bill Piper for providing me with this list. Cheers mate. Also thanks to Jayson for additional info on the VHS only releases.
Posted by Jack J at 9:37 PM 19 comments: Links to this post

Request of the week: The Reptilicus Song

Alright, Fred asked for it (in the previous post's commentary section) and here it is:

The Reptilicus Song, "Tilicus", from the Danish version of the Danish/American co-production REPTILICUS.

Danish comedian Dirch Passer doing the Reptilicus song, "Tilicus", but fortunately only in the Danish version

In contradiction to common belief the American version isn't a dubbed version of the Danish film. We're actually talking two films here as they filmed it twice and released the two versions with a year in-between; The Danish film is from 1961 and the US version came out the following year. In Denmark it was also aka Dus Med Uhyret on video.

Personally, I much prefer the American version as it was made and regarded as a horror monster movie in the great tradition of, well, horror monster movies! In early 1960s Denmark that genre was virtually unknown. The Danish distributors and film makers didn't know what to do with the concept so they put Danish comedian Dirch Passer in it and turned it into a comedy monster movie.

Fred asked to see Mr. Passer's Reptilicus song and here it is but I must admit I've always loathed and despised (two words that basically mean the same) that scene from the film. In fact I could have done without Dirch Passer at all! I mean they put a kiddie song in a monster movie! What where they thinking, haha.

Needless to say, the film became the laughing stock among Danish film-goers in 1961. REPTILICUS was made by the Danish film company Saga Studios and for many years it was standard amongst all employees at Saga that if they mentioned the film by its title they had to buy a round of beer for everyone there. But, please dear reader, we're fans of trashy films and of course I don't agree with those dimwits back then. Nor should you. Ed Wood Jr. was ridiculed but his PLAN 9 FROM OUTER SPACE is a highly entertaining piece of celluloid. Today it's a cult movie and holds a dear place to fans of psychotronic cinema. A far cry from the critics who dismissed it when it came out. Personally, I think REPTILICUS is a pretty entertaining trash film and altho the US one is the better version I still watch them both from time to time.

The US version is out on DVD from MGM's Midnite Movies series on Reg. 1 DVD. The Danish version is only released in Denmark from Nordisk Film and unfortunately it's an English unfriendly release. It only comes with Danish subs. It would be cool if MGM (or someone else) would put out a double disc released with both films and all subbed in English.

Trailer for the US version:


Trailer for the Danish version:


Amazing scene from the Danish version not in the US version:

You didn't see that one coming, eh.
Posted by Jack J at 2:05 AM 6 comments: Links to this post