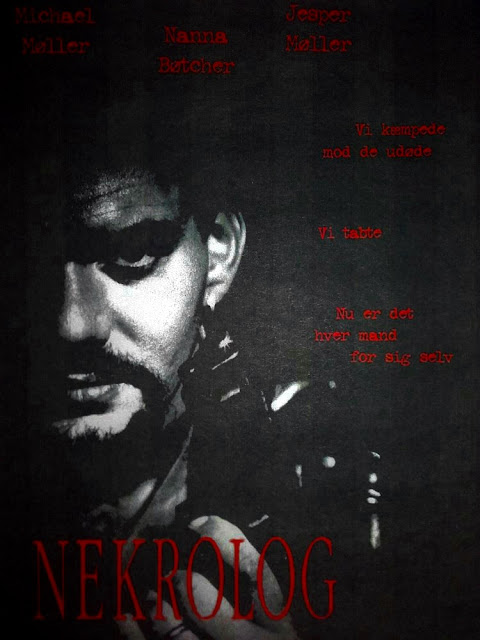 Way before zombie films infested the film landscape as much as the living dead do the real landscape (at least in said films) Ian Helstrup made his 30 minute, shot on 16mm, black & white zombie film debut NEKROLOG in Denmark in 2000. The film is piece of work on its own but was ultimately meant as a teaser for a real feature length film. Unfortunately, Helstrup passed away in 2001 a year after finishing the film. The scarce info that I have about cinema runs is the film had a very few theatrical screenings and then disappeared due to the director's passing away.

The film was never released in any home cinema format and has never been shown on television. Don't hold your breath while waiting for an official release. 16 years down the line I don't think we're gonna see one. A few first generation VHS screeners were sent out for review and one of those screeners has finally made it to YouTube - over a decade and a half after the film was finished! I remember seeing Ian Helstrup talking enthusiastically about his film in an episode of a Danish TV3 talkshow (I reviewed the episode in my zine Stay Sick! #1 in 2000). I've still got the programme on a VHS somewhere and I guess I ought to pull it out and upload at some point.

Needless to say, I wish Ian Helstrup could have made his full length zombie film that he dreamed of. Unfortunately, that wasn't meant to be. What we have here is a fine 30 minute short that shows a lot of potential. And do keep in mind this came out way before zombie flicks started popping up everywhere, rivalling the sheer numbers of the living dead that rise from their graves in these films.

The YouTube upload is in Danish sans subtitles. Hopefully some fan is gonna do a subbed version at some point but until that happens I urge you to watch NEKROLOG even if you don't capisce the lingo. You'll get the gist of the story line even without the dialogue and it's a fine wee new millennium film about rotting cadavers rising from their graves.


PS: If you read Danish you might wanna check the links on the YT page, one of them is for an interview with the director (from 2000).

Posted by Jack J at 12:05 AM No comments: Links to this post