Are ex-rental collectors early birds? They better be tomorrow (at least if they live in Scandinavia). xD.

Scandinavian readers who are able to watch the Danish tv channel TV2 Danmark ought to get up early tomorrow morning (Friday) and tune into "Go'morgen Danmark" as guest on the show will be none other than hardcore ex-rental VHS collector Diabolik, well known from such world famous message boards as Cinehound and Uncut.dk.

The program is running from 6:30 am - 11 am (GMT+1). Diabolik's segment is scheduled for 8:13 am but I'd tune in a bit earlier as things tend to not always run on time in a live broadcast.

And so what's Diabolik going to talk about you might wonder; City life in the Danish capital? Being a hillbilly from the countryside?? Exploring exotic lands far away??? Nope, he'll be talking about motherfucken DANISH EX-RENTAL TAPES!!!

I believe it's all thanks to the new Facebook group he's set up entirely devoted to Danish ex-rentals. 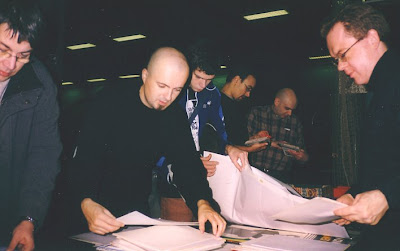 Here's an old piccie of Diabolik (seen on the far left) from a horror & sci-fi film con. that took place in Copenhagen, 2003. Next to Diabolik: Nils Markvardsen, unknown, Thure Munkholm, yours truly in a spiffy green/blue'ish shirt, and Jan Mouritzen (selling posters)
Posted by Jack J at 7:32 PM