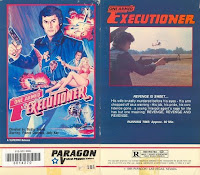 I wrote about the upcoming DVD release of THEY CALL HER CLEOPATRA WONG and ONE ARMED EXECUTIONER here and I've been informed that the release is now set for October. Also, I can now reveal it's going to be one release containing both films, i.e. not two separate releases. The info I have is that Andrew Leavold's interview with Bobby A. Suarez is probably going to be included. Word is the interview is the only one that was ever filmed with Bobby! I certainly hope it gets included.
Posted by Jack J at 7:57 PM