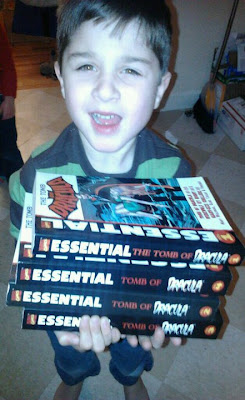 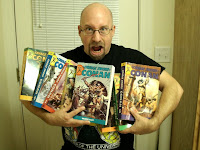 How cool is this! Zuzelo jnr with my pile of "Essential The Tomb of Dracula" volume 1-4 (reprinting every issue of "The Tomb of Dracula" from the early 1970s + crossovers). Argh! This is where the original Blade character stems from! This is Marv Wolfman/Gene Colan's awesome series which I used to read in its Danish translated editions (printed in 1974 and then again in the early 80s). But these reprints (most likely) smoke the old Danish ones; Original text, complete, black & white, uncut. Oh, and the fact that Gene Colan is one of my all time fave artists certainly cranks up the awesomeness volume a notch or ten. Thanks heaps to David (junior's daddy who incidentally does another "tomb") for this awesome (and certainly in my favour) deal! Dude, you're the best! You and Paul (Cooke) are both awesome and I'm happy to have gotten to know ya!