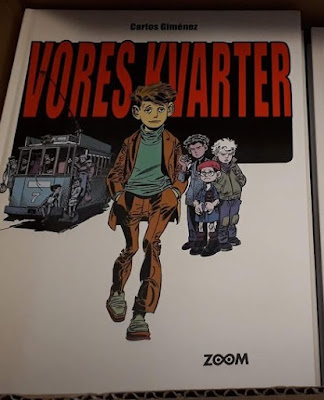 Finally! Finally!! Finally!!!
I've been hoping for a complete release of Carlos Giménez' comic book (graphic novel if you will) Barrio (aka "Vores kvarter") for years and years.
Barrio is Carlos Giménez' own story about growing up in Francisco Franco's Spain in the 40s and 50s. This is a comic book but trust me, it isn't "the funnies".
The problem is that the original version is in Spanish and there's no complete English, German or Danish/Scandinavian edition. I think there's a French translated edition but, alas, I don't read French either.
The original edition contains four books. We got one of them in Danish in the 80s and since then; nothing. Now ZOOM publishing (Denmark) is putting out a complete edition in two days. It's simply wonderful, fantastic, wunderbar!!! (and of course I have to decide whether I'll get it now and eat pasta for two weeks or wait till October!).
Hopefully enough people are gonna get this so we can get complete editions of Giménez' Paracuellos ("Børnehjemme") and Los profesionales ("De professionelle") as well. Neither of those are published in complete, translated form either.
Posted by Jack J at 1:14 AM