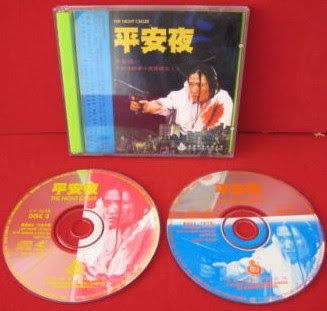 Why would anybody in their right mind spend 25 dollars on a VCD from Hongkong (notice the old spelling, LOL) when they've already got the film on VHS. Twice!? Uhh, I dunno but I just kinda did. Haha. The film is Phillip Chan's HK film NIGHT CALLER from 1985. It's something as rare as a Chinese Giallo movie! It stars Pat Ha (who's obviously a big hero on this blog as she played one of the coolest hitmen ever in ON THE RUN, and in that movie she certainly has thee coolest hairdo of any hitman!!), Melvin Wong, Phillip Chan and Pauline Wong. And altho it often gets so-so reviews I quite like it (obviously!, haha). My VHS versions are the UK and Dutch releases from Eastern Heroes in Cantonese with English subs and slightly lbx.
Posted by Jack J at 11:46 PM