The Wasp Woman - the director's cut 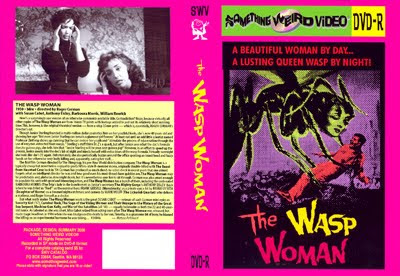 I ordered Roger Corman's THE WASP WOMAN last night. The version I'm getting is from Something Weird Video and this should be interesting! Now, there are a whole bucketful of different releases out there but according to the info on their site all other versions are of the TV print which has extra footage to make the film longer. This 35mm print is Corman's the original cinema version, i.e. the director's cut.

Here’s a surprisingly rare version of an otherwise commonly available title. Contradiction? Nope, because virtually all other copies of The Wasp Woman are from 16mm TV prints with footage added to pad out its relatively short running time. This, however, is the original theatrical version – from a crisp 35mm print – which is, essentially, ROGER CORMAN’s director’s cut.

Though Janice Starling founded a multi-million dollar cosmetics firm on her youthful looks, she’s now 40 years old and showing her age: “Not even Janice Starling can remain a glamour girl forever.” At least not until an odd little scientist named Professor Zinthrop shows up claiming that he can restore her youth and “stimulate the process of rejuvenation through the use of enzymes extracted from wasps.” Sterling’s staff think Dr. Z’s a quack, but after Janice sees what the doc’s formula does to guinea pigs, she tells him that “Janice Starling will be your next guinea pig!” However, in an effort to speed up the process, Janice sneaks into the doc’s lab at night and injects herself with extra doses of the wasp formula. Virtually overnight she looks like she’s 22 again. Unfortunately, she also periodically buzzes around the office sporting an insect head and fuzzy hands on her otherwise sexy body, killing and, apparently, eating her staff....

The first film Corman directed for The Filmgroup, his pre-New World distribution company, The Wasp Woman is a typically cheap but nonetheless enjoyably goofy Fifties-style B-monster movie, originally double-billed with The Beast from Haunted Cave back in ’59. Corman has produced so much direct-to-video dreck in recent years that one almost forgets what an intelligent director he was and how good even his most thread-bare quickies are. The Wasp Woman may be predictable and, plotwise, downright dumb, but it’s nevertheless sure fun to sit through. Corman was also smart enough to populate his casts with good and interesting actors, and The Wasp Woman has a bunch of them, including the underrated BARBOURA MORRIS (The Trip’s lady in the laundromat) as Janice’s secretary; The Mighty Gorga’s ANTHONY EISLEY (back when he was billed as “Fred”) as the nominal hero; FRANK GERSTLE (Monstrosity) as a private eye; a bit by BRUNO VE SOTA (Daughter of Horror) as a doomed nightwatchman; and cameos by MARK WOLFF (The Lickerish Quartet) who delivers a mattress; and Roger himself as a doctor.

But what really makes The Wasp Woman work is the great SUSAN CABOT -- veteran of such Corman mini-epics as Sorority Girl (’57), Carnival Rock, The Saga of the Viking Women and Their Voyage to the Waters of the Great Sea Serpent, Machine Gun Kelly, and War of the Satellites (all ’58) – equally believable as both the 22 and 40-year-old Janice. As talented as she was short, Miss Cabot retired from acting soon after The Wasp Woman was released, but made tragic headlines in 1986 when she was bludgeoned to death by her son, Timothy. In a gruesome bit of irony, he blamed the killing on an experimental hormone he was taking.... -- Watson Pritchard