I mentioned Metin Demirhan a couple of days ago and I'd just like to draw your attention to Bill of Onar Film's obituary.
Posted by Jack J at 9:40 PM No comments: 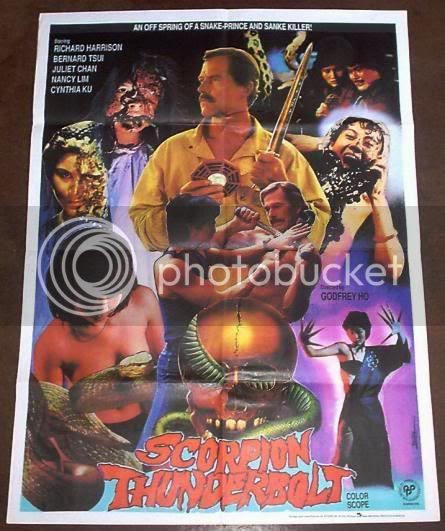 Ahh, tonight on eBay I won a much wanted Japanese VHS release of Godfrey Ho's fantastic cut n' paste flick SCORPION THUNDERBOLT Starring Richard Harrison! Back in the 80s Godfrey Ho invited American actor Richard Harrison to Hong Kong to appear in a movie. Ho shot a bunch of scenes and in later interviews Harrison has mentioned that he DID think they were all so very different that he thought it would probably become a very confusing film. What he didn't know is that Ho and his producer were screwing him over! They weren't making ONE film but several films! In fact A WHOLE BUNCH of films!! Most of them starring ninjas and many of them with 'thunderbolt' in the title. Ho & Co. (LOL) would take like 15-20 minutes of the footage with Harrison and splice it with either footage from an unreleased film, or from a film that did get a release but maybe had bombed. And so, viola, you have a whole pile of films you can sell for distribution! Among trash film freaks these films are known as 'cut n' paste' films. Obviously it's not hard to imagine that quite a few of these are ridiculously bad because... how could they not be! However, as with everything here in life whenever you take something and put it together at random, even though most of the result comes out crappy, you DO get that rare occasion when things not only fit - but fit tremendously well. And one such occasion is SCORPION THUNDERBOLT! It's such an entertaining piece of cut n' paste that it's almost like an unholy bastard spawned between a nun and the Devil that isn't supposed to be able to live in the mortal world... but it does. Ho spliced some of the craziest Harrison footage with footage from some old Hong Kong monster movie and... it just fits! I won't try and convince you this is high art or anything because... it isn't. BUT it is very, very entertaining. And now I've got this baby on (much) deleted Japanese video. It's never had an official DVD release anywhere in the world (there's a bootleg in the US that you can get thru Amazon with a so-so picture quality) and nothing could make me happier (well, actually lots could but you know wha'ah mean).
Posted by Jack J at 7:34 PM No comments: