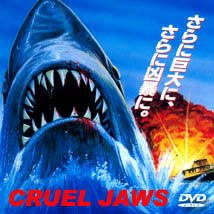 As you all know the skillful and masterful Bruno Mattei made RATS which has just been released on DVD from AWE. Well, Bruno didn't stop there with killer animal films! With CRUEL JAWS (aka Jaws 5) he not only ripped off JAWS but also every other JAWS rip-off he could find, haha. Long story short; killer shark is eating unfortunate teenagers. Good guy with wheelchair-bound kid goes against it while the town's bad guy tries to run him out of town. Gore, mayhem, and incredibly bad acting follow. In other words; great fun and very entertaining!
As I said, Bruno ripped off every JAWS rip-off in the book and I mean it literally; in CRUEL JAWS you'll find stolen footage from THE LAST SHARK (aka The Last Jaws), JAWS, JAWS 2, and Joe D'Amato's DEEP BLOOD.
Up next at Scala J: ROBOWAR (Mattei's PREDATOR rip-off!! LOL).
Posted by Jack J at 4:50 PM No comments: