Is that flesh in your bag, Cronie? 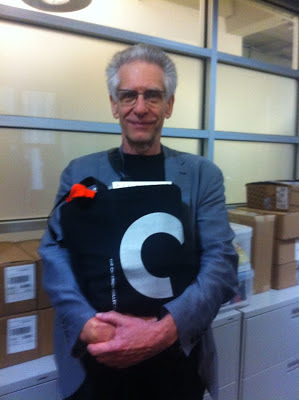 Here's a photo of David Cronenberg visiting the Criterion video label a couple of months back and needless to say fans are now wondering what he was doing there. Are Criterion working on upgraded blu-ray releases of their old DEAD RINGERS and CRASH releases maybe? Or did he just want a Criterion bag?? Personally, I think he just went in to borrow taxi fare as he forgot he only had Canadian dollars in his pocket. LOL. 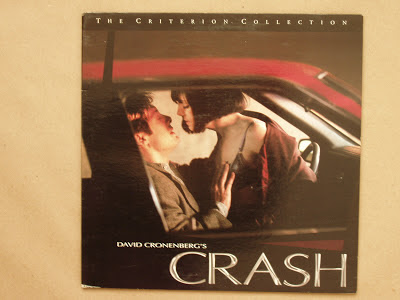 Btw, talking of CRASH; check this out! My new US laserdisc release of that much beloved film!! Well, most beloved by ME anyway. A lot of fans seem to think Cronenberg went over the line in perversity with this films but I beg to differ! It's one of my favourites of his films. I already have the Danish VHS and the UK DVD. Unfortunately, this old and way out of print laserdisc is the only proper release there is. It's presented in Cronenberg's preferred format of 1.66:1 (the DVD's and video tapes are either 1.85:1 or fullscreen) and as the only release it has a commentary track by Cronenberg. There's also a making of which may not be on any DVD's either but I'm not sure about that.
Posted by Jack J at 4:15 PM 2 comments: