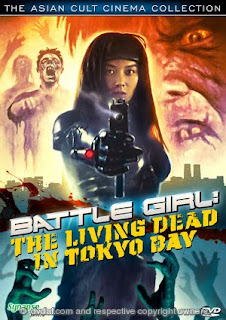 Me: Relax baby, cool it, all is good. Hahaha.

I know, I know, you don't capisce this, do you. Nah, you don't. It's not capisce'able for you ordinary folk out there to comprehend the greatness of this so lemme try and explain, slowly.

Yes, it is true; Kazuo "Gaira" Komizu's EMERGENCY! LIVING DEAD IN TOKYO BAY (original title: Batoru gâru: Tokyo crisis wars) is finally going to be released by a legit video company!!! (I'm sure it's redundant that I mention Gaira is also behind such classics as ENTRAILS OF A VIRGIN and ENTRAILS OF A BEAUTIFUL WOMAN). No longer will fans of exotic zombie flicks have to pull out the ol'e DVD-R from Video Search of Miami (or 3rd generation dupes off the VSoM boot, haha). Sounds amazing, aye!

It's the good people (well, Don May jr.) over at Synapse who are putting LIVING DEAD out on DVD. Street date: February 23, 2010. It's already listed on Amazon. It must be something like 15 years ago since I got hold of this film the first time; on that aforementioned bootleg VHS from VSoM. Or rather on a video tape from a tapetrader in Finland copied off a boot from VSoM, haha. Then much later, very recently like one or two yrs ago, I re-bought the film on DVD-R from that thar boot company in order to get a slightly better picture quality. Their version is pretty decent enough, good picture and comes with English subtitles provided by Thomas Weisser & Co. but needless to say getting a proper DVD is gonna be so much better, not least cos for the first time it'll be presented its original letterboxed format. [EDIT: actually it's in fullscreen. Thanks Jayson]

So what's EMERGENCY! LIVING DEAD IN TOKYO BAY all about I hear you ask. Well, a deadly green meteor crashes in the middle of Tokyo harbour and panic ensues partly because the rays from the green meteor turn dead people into... zombies! (you didn't see that one coming, eh). And our heroine battle chick has to... ehh... I forget... do some stuff I guess. But very entertaining. hmm, maybe I should go and watch my boot again. :/

Oh, and as you can see on the cover there's also a slight re-titling as Synapse have added the "Battle Girl" moniker from the Japanese video. Personally I think they should've left the old VSoM title as it were but, hey, that's a minor gripe.

Over on DVDManiacs Don May jr. said this about the interview:

At 53 minutes this interview on BATTLE GIRL is also quite brain melting. I think the guy must've smoked about 9 packs of cigarettes in that hour. It's so odd and crazy, we decided to just not edit it at all and have the entire thing on the disc! LOL!

PS: Synapse are (most likely) also going to release a VIOLENT SHIT box set!!! More on that later.
Posted by Jack J at 5:17 PM 8 comments:

The dead are in their graves and you are dead. Understand!

I'm by no means an expert on this genre but this is one of my favourites and this is a pretty cool trailer (plus the title music is awesome!). :D

VIVA DJANGO was released in Germany as a Trinity brothers film, haha. I have it on tape (I actually wrote a long comparison article in Banned in Britain #1 fifteen yrs ago) and it's hilarious. The German title is Joe, der Galgenvogel [lit. trans: Joe, the Gallows-bird] The original version is a cold and cynical western, very violent and relentless. The Germans changed the entire dialogue so it became a comedy along the lines of the real Trinity bros films. The fact that Bud Spencer's character isn't there is even explained in the new dubbing. I wish someone would subtitle the German print and release it. It's a laugh riot. In the original version there's one scene where Django in a cold manner shoots a guy in the eye. Well, we can't have that in a funny western aimed at 12 y.o. boys in Germany so the scene is explained by a voice over who says something along the lines of "I did the old powder-in-the-eye trick; instead of shooting I blew powder into his eyes", hahaha. In another scene Django shoots a guy in the back but this is cut out and explained with some more voice over: "I let him ride away, there's been enough killings". Haha.

Here's the awesome intro song in full followed by the amazing shoot-out at the end (the uploader basically cut away the entire middle part, lol). I really should check out if there's CDs out there with only spaghetti western soundtracks on 'em. The bad guy is played by German actor Horst Frank who had one of the best bad guy faces ever.