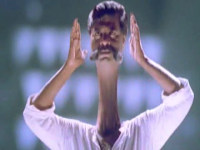 Yesterday, one of my readers, Henry, asked me about a film clip from the Mondo Mababro special on Indian movies of what seems to be an insane Bollywood film (at least I think it's a Bollywood film) and I'm afraid to tell you the truth no I didn't know the film. Boo-hoo. Fortunately my almost-Danish Cinehound friend Jola from Germany, who is an expert on all things Indian, did a little digging and soon after came up with the right answer: The film is AMMORU (Telugu language, India 1995; Director: Kodi Ramakrishna). You can find it on IMDb here. Jola says it's entertaining but she also adds it's not his masterpiece. That would be this one: DEVI. Naturally I also had to bug Jola about the film's avability and to my surprise AMMORU is actually available not only on DVD but it even comes with English subs. She also says it comes with crappy picture quality but at least it's available and you can get it here. The price is Rs 375.00 which is about 9 dollars US before postage. I'm gonna get this when I get some dough that's for sure! xD.

Needless to say big thank-yous go out to Jola for her help!

If you've read some of my old posts recently you know I've been talking quite a bit about the rare and unreleased (to homecinema anyway) Hong Kong/Thailand Lo Lieh film BIG BOSS PART 2 which Naushad Mohamed from Global Video had a print of until very recently.

A while ago a forum member that I know from Uncut.dk forum wrote to him and asked about the film and was told that he sold off the print to a cinema in Zambia. On the Kung Fu Cinema forum he has stated that he's kept a copy of the film (in one format or another, I'm not sure if it's a mere DVD-R or what) and I was hoping he'd be willing to sell either DVD-R copies of the film or even put it out as a proper DVD. Well, no such luck. He mentioned today on KFC that if he puts it out it won't be for several years. 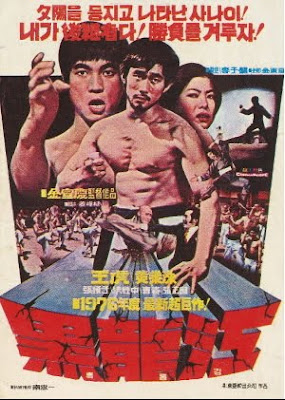 However, I asked Naushad which movies he is planning to put out in the near future and here's a list of upcoming titles. They're all taken from his 35mm prints.

And later in the year/possibly next year:
KARATE STORY
ROTARY KICKS


GLOBAL VIDEO
Global Video is located in South Africa and is run by Naushad Mohamed. From what I'm told Naushad Mohamed inherited a lot of films from his father-in-law who owned one of the biggest cinemas in S.A. and it's from this huge collection that he gets his rare prints.

Global Video is quite well known among fans of Italian spaghetti westerns as Naushad has put out many of these titles on DVD. Titles that are rare and/or haven't even been released to homecinema anywhere else. Global has also put out a number of other films but in posts on various forums Mohamed has kept stating that he prefers to put out spaghetti westerns as they're much more profitable than for instance Filipino films. He's always made it clear he's in this as a businessman, not as a film fan.

Actually, at some stage he was going to go put out a whole line of very rare Filipino films (one was Bobby A. Suarez' COSA NOSTRA ASIA, starring Chris Mitchum, which has never been released anywhere in English) but he cancelled the line after only three films (BIONIC BOY, DYNAMITE JOHNSON: BIONIC BOY 2, and THEY CALL HER CLEOPATRA WONG) because they didn't sell very well (he stated at one point they only sold 300 copies each). There's been speculation (and debate) among fans on message boards as to whether his DVDs (real factory printed DVDs, not DVDR) are bootlegs or not but Mohamed maintains they are legal releases as he has bought the rights for them in South Africa.

I bought the two BIONIC BOY films and CLEO WONG from him and they're pretty cool to have, not least since they haven't been released anywhere else on DVD. The picture quality isn't all that great; I don't know if he has a machine to copy from 35mm himself or he pays someone else to do it but the DVDs look like they've been transferred in the most crude way possible. When you watch the DVDs it's exactly like watching a film print with all its flaws that come from having been played quite a bit in cinemas. I guess somehow it has a certain charm.

The DVD covers are pretty basic and there's absolutely no extras on the discs. Global have no website as, according to Naushad Mohamed, nobody uses that in South Africa! So it's actually a little difficult to figure out how many titles are available or not.
Posted by Jack J at 4:22 AM 3 comments: