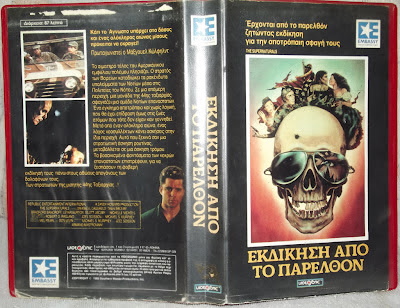 I received THE SUPERNATURALS on video from the US yesterday. I didn't empty the mailbox till very late and I was pretty tired but since I hadn't had anything to eat I thought I'd grab a bite and watch the beginning of the movie before turning in. I didn't know anything about the film other than I'd seen the cool Greek video cover and knew it was a low-budget zombie film and that it wasn't released on DVD. That alone spurred my interest enough to make a bid on the Greek tape, and when I stumbled over the NTSC tape on eBay I thought what the hell, the US tape might very well have a better picture quality. Greek tapes can look fine but often they equal watching a television programme from an outskirt TV station while someone on the roof is holding the aerial trying to pick up the weak signal. From foggy to more foggy. I still don't know what my Greek tape looks like as it's still located at the Church Moors in Finland but the US tape looks pretty good. Sharp picture and the tape has only minor traces of being worn.

Incisive plot description:
The film starts off during the civil war in the United States in the 1860s. It's towards the end of the war and a group of soldiers from the North have caught a bunch of soldiers from the south. They force them to walk over a mine field. Some stuff happen. And then we switch to the present (well, the present of the 1980s anyway) and a group of recruits arrive to the very same forest where the beginning took place a hundred years earlier. And then... cut to the chase... they're attacked by civil war zombies! 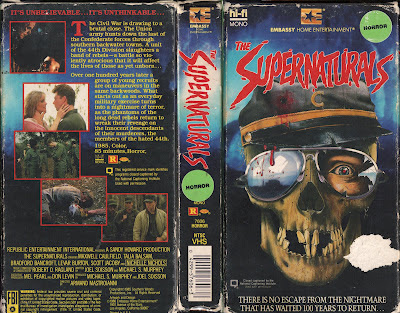 I thought THE SUPERNATURALS was great and I was entertained all the way thru. As I said at least enough entertained to finish it altho I was really tired and only planned on watching 10 minutes before going to bed! It's low-budget but it's well filmed and the actors are good. The dialogue wasn't corny (altho there's nothing wrong with corny dialogue of course). There's at least one STAR TREK actor in there and a brief cameo from one of the Gibb brothers (apparently. I don't know shit about that band but that's what I read anyway). The zombies look great. Not like your regular George A. Romero or Lucio Fulci zombies but more like skeleton zombies. There's no gore or nudity but I can live with that.

For some reason the film belongs in that big pile of films that have never been granted a DVD release and that's a pity. This film deserves to be seen again by a broader audience. If you can stand watching films on YouTube someone has uploaded the entire film there.

EDIT: Fred Anderson of Ninja Dixon informed me that there is actually an English friendly, uncut German DVD release! I'll post the cover at the bottom of this post.

I copied the American VHS cover from VHS WASTELAND which is a great site where they upload video covers in hi-res. My own cover looks better as theirs isn't in the best of conditions. The Greek cover is the exact one I bought from Member-X's eBay listing. I think the Greek front cover is the by far cooler one.


I couldn't find a trailer so here's the clip from the Greek tape that Member-X posted with the auction: 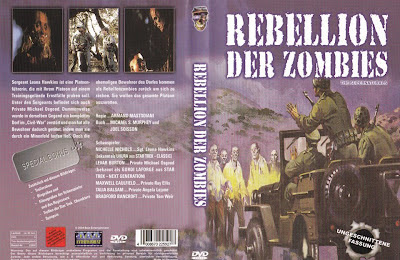 Thanks to Fred for the info and German DVD cover. Fred reviewed the film over on his NINJA DIXON blog. Man, he even mentioned the film director's name! >_<