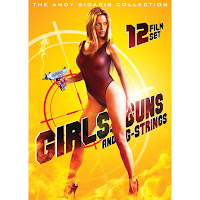 Thanks to a guy called Brian I discovered this 3 disc DVD set last night; It's from Mill Creek and it contains 12 Andy Sidaris films!! The set has just been released (in March) and they're selling them like cupcakes. Well, they ought to anyway, who wouldn't want 12 Andy Sidaris films! If you're in Denmark you might remember I had the image from Sidaris' STACEY on the cover of the last issue of STAY SICK! Unfortunately, STACEY has never been released on DVD altho it's reportedly his best film alongside SEVEN (which to the best of my knowledge has never been released on DVD either, but it's hard to tell as the Sidaris DVD releases is a jungle out there!). 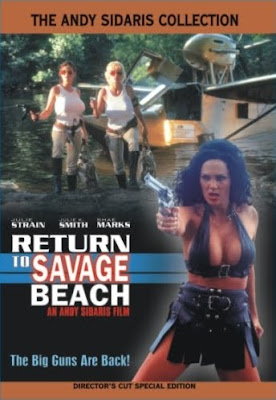 Anyhoo, I ordered the set right away and fortunately I checked with Amazon.com cos it turned out it's heaps cheaper ordering the set from there than from Amazon UK! Including postage to Europe it came to just under 12 bucks US but from the UK branch it would have been around 18 dollars. Of course, now I have to live with the risk of being caught by customs but, pfft, I spit in the face of danger! 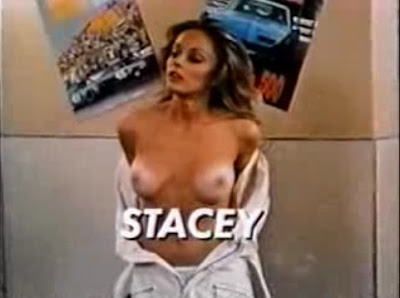 The films in the set are: 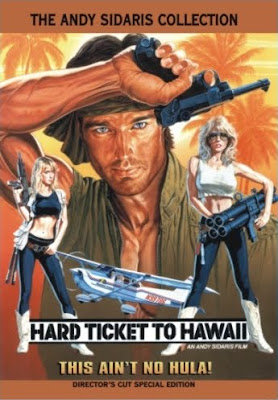 There's an official Andy Sidaris webpage where the box is for sale. When I registered (to be able to watch trailers) the registration email was signed by the late director's wife, Arlene Sidaris.

There are covers for each film here and for the front page go here. 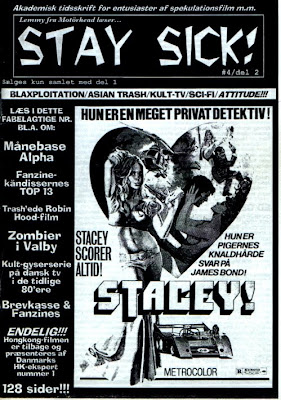 "It wasn't a significant bullet"


- and here's the full interview:

- and here's an interview with the BBC interviewer about the incident (for some reason it's non-imbeddable).
Posted by Jack J at 5:30 PM No comments:

"I was looking at the lovely blonde in the one-and-one-half-piece swimsuit, thinking that if she got any curvier she'd be banned, and then, just as if she knew exactly what I was thinking, she got up and started walking towards me. Possibly to slap me."

Ahh, the beginning of another Richard S. Prather novel. :D
Posted by Jack J at 4:50 PM No comments:

Japanese in the mail

In the mail this morning: AKIRA!!! On blu-ray you ask? Nope!!! The double mammoth vhs case from the UK that I couldn't afford in '93. I found a seller with a brand new copy on Amazon UK. "Fuck it", I thought, I wanna finally scratch off that tape from my early 1990s wants-list!!! Muhahahahahaha...

Tape #1 contains the film itself, fully letterboxed, in Japanese w/English subs. Tape #2 is a 50 min production report. I'm not a manga geek so I have no idea if that one has even been released on dvd (but it probably has).

Btw, I've recently discovered that there's no less than three different English dubs! Imagine that. Why bother with any dubs!? Watch the damn film the way it was meant to, in Japanese. :D
Posted by Jack J at 4:21 PM 2 comments: