The Keep on shady DVD 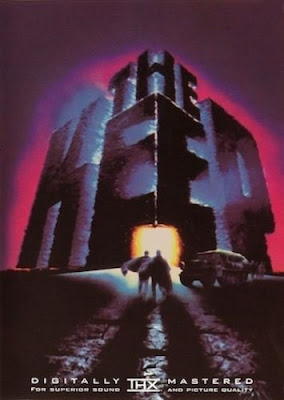 When I lived in London in the late 80s there was a period when I was unemployed (what a surprise!) and I'd often be on the tube to go places to apply for work. Long hours on the underground meant long stretches of boredom so I'd bring books to read. And one of them was "The Keep". I remember it grabbed me to the extent that I would choose possible job positions at far away destinations so that I could spend more time reading the book! I still have that old copy of the book on my shelf (altho I must admit I haven't re-read it since that first reading on the tube).

I've wanted to watch the film version of THE KEEP for years but have never had the chance. I've missed out on the LD several times but now... I mean NOW!!!... I'm finally getting the damn movie! On DVD no less. Well, a bootleg DVD obviously as there's NO official release anywhere. And we could be waiting for another 100 yrs before we get one. The DVD is - according to the UK eBay seller - a letterboxed version so I assume it's from the lbx'ed LD (there's also a FS LD). Apparently the TV print has a longer (and better) ending but I haven't been able to find that version so this'll have to do for the time being.
Posted by Jack J at 9:26 PM 5 comments: