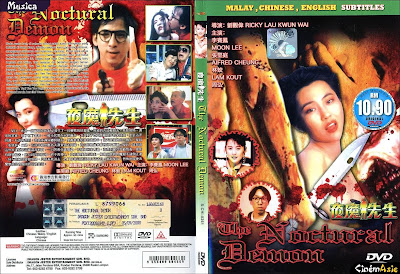 Way back in the early 90s there was an ad in an issue of the UK mag "Eastern Heroes" for some of EH's Hong Kong tapes. Actually, as far as I remember their "releases" were 1st generation dupes. Buy hey, it was a different world back then. We didn't have DVDs, we didn't have video companies that were interested in Asian movies, and there weren't thousands of fans to support releases. Actually the only HK movie fans around were just me, a couple of guys over in England, and Craig Ledbetter + Thomas Weisser from "Asian Trash Cinema"!!

Anyway, one of the films in that ad was NOCTURNAL DEMON starring Moon Lee. Back then I imagined the film probably dealt with Moon Lee fighting some evil demon from Hell. Unfortunately, I didn't have much money back then (now THERE'S a surprise!) and so I never got to order the tape from the UK. And years later it became just impossible to get hold of, not least seeing that NOCTURNAL DEMON never received a DVD release.

Then last year, something like 12-13 years after having discovered the film's existence, I discovered that it was among a big pile of films on laserdisc that someone was selling at Asian Dvd Guide forum. By the way, that "someone" actually turned out to be Miles Wood who's written about HK movies and had a book published on the subject. He also lives in the old crown colony. "Wauw" you might say but as it is mr. Wood doesn't even freaking like HK movies anymore, haha. Funny but also sad. So, like, he's living in this cool place which tons of HK movie fans would kill to live in and he doesn't give a rat's ass about the movies anymore, LOL.

Anyway, I wrote to him about the laserdisc but learnt that it had actually been sold. Fortunately, Miles had made a DVDR copy before shipping it off and he offered me that I could buy a copy so that was fantastic! I mean, after all these years to finally get hold of this film which I was hoping would turn out to be an awesome horror movie.

Much delayed I watched NOCTURNAL DEMON last night and, uh, it's wasn't quite the horror movie I had hoped for. It did revolve around a serial killer but that's actually just the setting. The rest of the films is a weird (very weird) comedy! However, although NOCTURNAL DEMON turned out to be something ELSE than a dark and nasty horror movie I must say I enjoyed it heaps! There were scenes that had me rolling in tears from laughter. I can only recommend you watch the film. Btw, I mentioned it stars Moon Lee and of course any film that stars miss Lee is watchable as far as I'm concerned as she's such a fun and quirky actress. I'm not gonna review the film on this blog (but maybe later) but there's a really good fairly short review here. I suggest you read it. Credit info here.

The cover on this page isn't from the laserdisc but from a newly released dvd! YES, THAT'S RIGHT!!! After having remained unreleased during all those years when I desperately tried to find it someone obviously had to put it out on cheap and easily available DVD as soon as I found a copy off a laserdisc and had it sent over all the way from Hong Kong!! Figure that!!

However, the film remains unreleased on its home turf of Hong Kong! The DVD is released in Malaysia of all places and is out from Dragon Jester who's a new company that has specialised in old obscure HK films. The picture quality of their DVDs isn't great, it's almost like watching old video tapes from HK; fullscreen, subtitles cut off left and right, and they've obviously kept the old wonkey translations. But, hey, who's complaining! Certainly not me. This way I'm finally able to watch old rare HK flicks that I've had marked as "must find!!" in my old well worn copy of "Asian Trash Cinema - The Book" for well over a decade! And as wonkey as the old WONKEY English subtitles may be they ARE English subtitles. Dragon Jester could easily have chosen not to provide English subs at all, after all they are a company in Malaysia catering to Malay customers.

In addition to NOCTURNAL DEMON Dragon Jester have put out quite a few cheap (VEEERY cheap) DVD's of old very rare films. I don't have their new DVD of NOCTURNAL DEMON but info on a French HK site makes me believe it's the same fullscreen version they're selling. Altho not strictly speaking a horror movie as I said before I wholeheartedly recommend it!!

What's happening with Jared's WORLDWEIRD blog??? For a moment there, a couple weeks back, it seemed our old buddy was making a return to the fandom of weirdo horror movies from strange places but he disappeared again. Too bad, pal. There aren't too many of us, sorry to see one go. The old site here.
Posted by Jack J at 1:56 AM No comments:

Fist of the North Star soon on dvd

Ahh, FIST OF THE NORTH STAR! I remember this from the early splatter movie days in the early 90s. I still have my old English dubbed VHS from Manga in the UK. FIST is finally gonna be released on DVD with its original Japanese dub soon (there was another reg.1 DVD ten yrs ago, but it only carried the Eng. dub). More here.

[from Nippon Cinema site]
In the post-apocalyptic near future, Earth has been utterly devastated by nuclear war. Only the strongest survive in this brutal landscape, and Kenshiro’s inherited “Hokuto Shinken” style of fighting may make him the strongest of all—allowing him to cause spontaneous implosion in his enemies after his blows have landed. Unfortunately he is betrayed by his best friend Shin who uses the “Nanto Koshuken” style to carve 7 scars in Kenshiro’s chest, leaving him for dead and stealing his girlfriend Yuria. Many months later a cloaked figure appears, making gangs of super-powered lunatics seem like weaklings in comparison to his fighting skill. Kenshiro is back even stronger than before, and he’s not going to stop until he’s taken back what’s rightfully his.
Posted by Jack J at 12:01 AM No comments: