I so hate the internet right now! 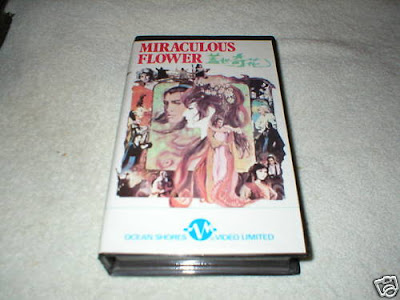 Yeah I know. The headline is one that you'd be more likely to see on Patrick's "Bearded man" blog (and where the hell is Patrick??) but, man, I really so do hate the sack of shit that is the internet right now. Thing is I had been waiting for an auction for the über über rare Ocean Shores VHS release of MIRACULOUS FLOWER (aka WOLF DEVIL WOMAN 3) to end. And since I knew I would be there when the auction would close I'd only put $15 on the damn tape. Didn't wanna reveal how much I was willing to cough up. And then my internet connection went out to fucken lunch all night!!! Ahh man, for fuck's sake!!! And NOBODY made bids for the tape except one single asshole (probably a nice guy) who scooped it up for 15.50 dollars!!! Arrrrrrggghhhhhh!!!!!!
Oh well. Can't win 'em all I guess, haha. Well, congrats to the winner, whoever you are (and it's not like I don't have the über über rare Danish release of the film, LOL, but that cover there is just so much cooler than the lame one I've got!).
Posted by Jack J at 5:56 AM 2 comments: