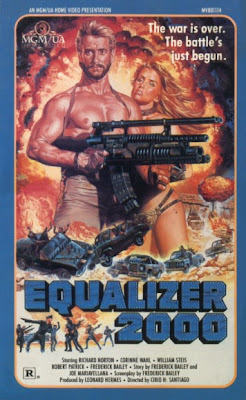 Friend and follower of this blog Burt Spoor was interviewed by Andrew Leavold yesterday on Facebook and I posted a bit of that interview on my Filipino war movie blog yesterday. One of the films Burt talked about was Cirio Santiago's MAD MAX 2 clone EQUALIZER 2000 (aka Defender 2000) so I thought I might as well pull this one out of the pile-to-watch pile and give it a spin. :D

What can I say other than it was good fun! And everyone was in it: Richard Norton, Don Gordon, Eric Hahn, Henry Strzalkofski, Nick Nicholson, Vic Diaz, and Bert Spoor. Some of the storyline doesn't make sense at all but you sort of expect that don't you, haha.

My VHS is a Danish tape from Juno Media and I'm certain it's uncut. Fred Adelman reviewed the US tape from MGM/UA Home Video on Critical Condition but that version only runs 77 minutes. Fred mentions that the uncut tape runs another 8 minutes so I'm confident the Danish tape is uncut as it clocks in around the 84 min mark. Also, the two scenes that Fred refers to as being cut out of the R rated tape are both in the Danish version. Unfortunately, this isn't released on DVD.

I might as well repeat Burt's bit about Equalizer 2000, altho he didn't remember that much from it, LOL.

Bert Spoor:
I cannot remember much of the Equalizer, I did the routines and died again several times. A lot of background action, being blown away and fly the sky. There was a small incident however I won't forget. There was a little tree left in the frame, and this little tree was suppose to break at gunfire. At action the little blast made some noise and ... Read moresmoke, but the tree was still there. At take two, just about action, this sucker all of a sudden falls down, very slowly. It's quiet on the set then everybody starts laughing when Cirio was cursing: Putanginamo. Third take the tree was set back to possision, I think this one worked... 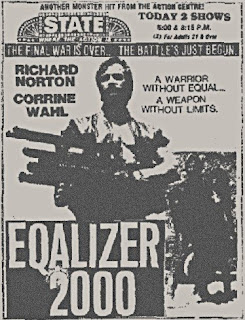 One thing I'd like to know tho; Who was the chick that Norton hooks up with? Was she in other Filipino flicks? And what was Richard Norton really like? In most of his films he plays the bad guy but here he's the hero. Maybe he got to play the hero cos he has that broad Aussie accent like Mel in the MAD MAX films, xD.

EDIT: I looked up the film on IMDb and the chick who plays the hero's love interest is Corinne Alphen and the data base says she now works as a certified professional Tarot card reader, haha.

MORE EDIT: I found the trailer on YouTube. Yay!