Thou shalt not... break the Motion Picture Production Code 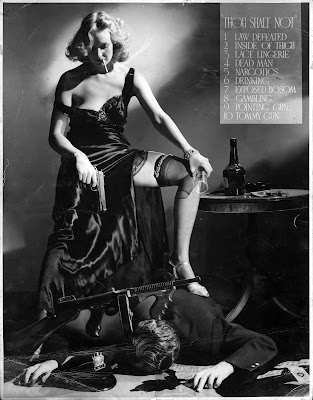 Check this truly awesome still that was printed in an issue of LIFE MAGAZINE sometime in the late 1930s as a response to the film censorship regulations in the USA called the Motion Picture Production Code aka the Hays Production Code which came into effect in 1934 and lasted until 1968. Like the Comics Code it was created to ensure that films didn't have a negative or demoralising effect on its viewer.

In the still are listed the basic "Don'ts" described in the code - and if you check the picture every one of them is broken! I would looove this as a poster. I've seen one on an auction site (thanks for the link, Jay) but it was sold in 2008 and I haven't been able to find any others.
Posted by Jack J at 3:09 AM 4 comments: