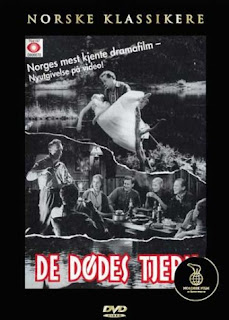 I finally watched Kåre Bergstrøm's excellent Norwegian horror movie DE DØDES TJERN from 1958 and... woh-hoah!! What an awesome horror film!!! This is a classic in Norway but is practically unknown in the rest of Scandinavia. My gawd, they should show stuff like this on Danish TV instead of those retarded reruns they keep force-feeding us with!!

The plot deals with a group of friends who stay in a cabin in the forest near a lake. The photography is great and the atmosphere is so thick you could slice it with a knife. But other than that description I'm not gonna spoil anything for you by revealing any more of the plot. But if you like spooky horror flicks then this is it! When you're a seasoned horror fan it takes quite a bit more to get a fright but... Gott im himmel!... I didn't even wanna go into my kitchen in the dark for more coffee during the film! I don't even remember the last time I watched such a spooky horror movie. Brrr. There are absolutely NO Danish horror movies, new or old, that come even close. It's an OFFENCE this isn't already out on internationally released DVD. And it's a pure crime to humanity that the upcoming DVD is a Norway only release. I just hope that at least it'll have subtitles in Norwegian (the accent was a little heavy in a few places but I understood most of the dialogue).
EDIT: the dvd has English and Norwegian subtitles.

DE DØDES TJERN is based on André Bjerke's book by the same title from 1942. There's a Danish edition from 1943, entitled De Dødes Sø.

Thanks to Dag-Johnny for getting me this on DVDr.


EDIT (28/07/09): When I raved about this film in my usual exaggerating manner over on Uncut.dk someone pointed out that the film NATTEVAGTEN (the original Danish version of NIGHTWATCH) is pretty good too. And I gotta admit; Yes, NATTEVAGTEN is definitely good! Actually, I bought it on UK DVD recently).
EDIT (29/09/09) Alright, alright, Lars von Trier's RIGET TV series is pretty damn good too!
Posted by Jack J at 2:03 AM 4 comments: