Do yourself a favour and check out this mighty cool Halloween tune!
Posted by Jack J at 3:22 AM 3 comments:

New Swamp of the Ravens dvd 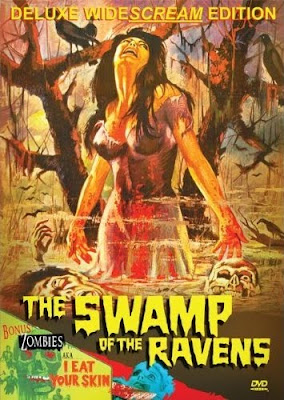 VCI in the States have just released Manuel Cano's SWAMP OF THE RAVENS on DVD sourced from a spiffy 35mm uncut print. The DVD also includes an equally uncut version of I EAT YOUR SKIN (aka Zombie) taken from a widescreen print. This certainly sounds good. SWAMP was released a few years back from Something Weird Video but apparently that DVD was missing some footage at the end. I should point out I have no idea of how much is missing from the SWV print as I haven't seen that print. I look forward to this new DVD though and have just ordered it today (well, yesterday I guess as this is 3 in the morning, LOL). I do own the other film, I EAT YOUR SKIN, which was also released on a SWV DVD (in their DVD-R line actually) and that version certainly needs an improved release.

Odd the talk gets diverted to Bava's BLOOD AND BLACK LACE as there is a solid connection unto SWAMP OF THE RAVENS. Manuel Cano produced Mario's very personal HATCHET FOR THE HONEYMOON as well as SWAMP writer Santiago Moncada co-writing that film as well! SWAMP is grossly underrated, a highly unusual, evocative, very enigmatic film with a singularly unique atmosphere....Hands down it possesses the most abstract and unorthodox "zombies" I can recall in any film. The Ecuadorean locales, particularly the swamp wherein Dr. Frosta's abode and ramshackle laboratory are located is a masterpiece of a natural location, so rich in depth of ambient dimension, the film is quite morbid within its fetishism, contains one of the best necrophilia sequences I have ever seen, but the necro-medical fetishism exuding throughout the film is, as well, quite unparalleled and of much power, including the very effective utilization of an actual human post mortem dissection (as effective and jarring in its smaller scale manner as anything in MEN BEHIND THE SUN, particularly since it just comes at you very fast, like a rock pelted directly into your head, from left field, you do not expect it, there is no ceremony culminating within it, it just cuts to it and it starts!). The English dubbing could be better, but Moncada's dialogue is full of caustic wit, character idiosyncratic dimension, even a type of brilliance to its narrative structure, he is in top form here. I think the recently deceased Aldo Sambrell referred to director Cano as, (to paraphrase) "..completely insane...".......haha......

Great new for fans of this film, I contacted VCI to ask specifics, firstly, I got them to correct their mistake for citing co-feature on the disc, Del Tenney's ZOMBIES, as running 148 minutes (!!!!)....Though I am disappointed that there will not be a two and a half hour ZOMBIES/I EAT YOUR SKIN....lol.....The print is still longer than many at 93 minutes.......

Anyway, here's what they wrote, it sounds very promising for both films!:

SWAMP OF THE RAVENS - was mastered from a 35mm negative. The video transfer was done 16x9 anamorphic widescreen with an aspect ratio of 2.35:1 (the original aspect ratio of the film) and is enhanced for 16x9 monitors. The film was produced in Spain but the version we are releasing has an English soundtrack.

ZOMBIE - the running time is really 93 minutes. The video transfer was also also done 16x9 anamorphic widescreen with an aspect ratio of 1.77:1 with enhancement for 16x9 monitors.