Worldweird cinema is a many-splendoured thing... here be TURKISH RAMBO!

Alright, I'm bending old poetic prose here but, hey, with the upcoming release of TURKISH RAMBO ... IT'S IN PLACE!!! 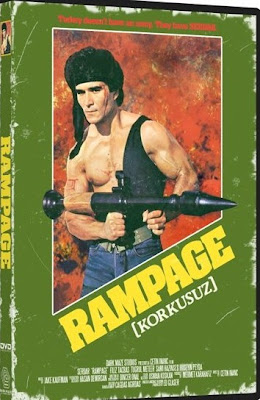 TURKISH RAMBO (original title: Korkusuz, directed by Cetin Inanc) is being released by DarkMaze this month. DarkMaze is a one-man video company in the US run by a guy called Ed. He's also a member over at Cinehound and quite understandably Ed doesn't wanna get hassled by the copyright owners of the "real" RAMBO films so TURKISH RAMBO has been retitled to RAMPAGE (LOL).

Unfortunately, also due to avoiding a hefty lawsuit, Ed has had to change the original soundtrack which again means he won't be able to release the film in its original Turkish with subtitles but has had to dub it into English. Oh well, I'm just happy that we're finally going to see this exciting piece of Turkish celluloid.

Obviously it's not like some of us don't already have TURKISH RAMBO (on boot from Trash-online, check them out they've got heaps of cool stuff!!) but it'll be nice to actually know what the fuck they're saying for a change, haha. Oh, and apparently Ed got hold of a good print.

For a while there it seemed he could only get a video master where the picture had been altered to fake letterbox. He was told by the owners that that was ALL they had! So Ed actually asked at Cinehound if we would rather have a dvd release with fake letterbox or a dvd taken from an old Turkish fullscreen video tape!

Well, luckily the people in Turky managed to dig up a proper print after all!! If this sells well Ed's considering to put out more obscure stuff outta Turkey. Good on ya, Ed! And I for one really look forward to this. I can only urge everyone to get this!

This EXITING dvd release is set to hit the streets at end of April (there's an actual date but I don't remember and I couldn't be arsed to check). It'll be released in two different version whereas the "old video cassette" retro look is purely for those who order thru DarkMaze's website.

Here's the old TURKISH RAMBO bootleg from Trash-online in Greece. 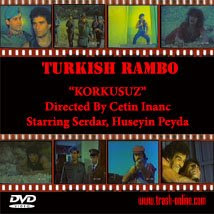 I really also OUGHT to point out that Çetin Inanç, the director of TURKISH RAMBO, is also the popular director behind some other Turkish fan favourites! A number of them belong in that much loved sub genre called remake rip-offs (i.e. remakes of American films remade in faraway exotic lands). The probably most well known of these movies that he did (most well known to fans outside of Turkey anyway) are: TURKISH STAR WARS (aka The Man Who Saves the World/Dünyayi kurtaran adam), DEATH WARRIOR (Ölüm savasçisi), and TURKISH ROCKY (Kara simsek). I haven't watched TURKISH ROCKY but the other two are great and very entertaining!! Check them out if you get the chance.
Posted by Jack J at 8:24 PM 2 comments: