I watched THE BLONDE FURY (aka Lady Reporter) last night. I've only watched it once before (some twenty years back on German television!). This is Cynthia Rothrock's film and it's such an fun flick overall.

The plot is confused, her hairstyle changes from scene to scene (because there was a long gab in shooting the film) but, uh, it's not like we're not used to confused plots in HK films. Haha. The good, good man John Charles* starts off his review in the HK filography book this way: "Awful comedy relief and insipid dialogue detract severely from..." and gives it 4 stars out of 10 (which in regards to his star system renders the film worthwhile only to fans of the director/actors with low expectations!). 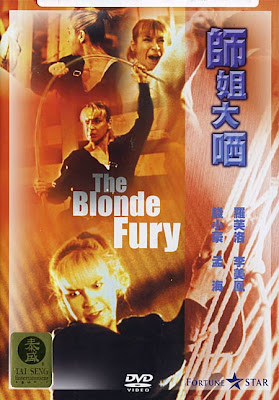 The US distributed version from Tai Seng; same cover but with an added sticker.

I don't agree in reg. to THE BLONDE FURY, like I said it's such a fun movie. It's got violence, the usual kind of batshit crazy insanity we're used to with these films, and it's got Cynthia Rothrock in the middle of her best period film wise. And the film is funny too. Highly recommended (in my book anyway!).

Unfortunately BLONDE FURY is hard to find on DVD. The version I got hold of is the old Deltamac DVD from HK. Tai Seng distributed it in the US (reportedly under the alternative title. Interestingly enough, altho the print used for the HK DVD uses the BLONDE FURY title the alternative title is also added in a subtitle under the real title!?). However, despair not, you can get it on VCD from dddhouse and hopefully Fortune Star will rerelease it on DVD at some stage as well.

The Cinema Snob on Video Violence

Here's an old episode of The Cinema Snob. He was pretty funny back in the day but I think he blew it when he started to post out of character. It was more fun when you thought he actually was like in those videos. Oh well.
Posted by Jack J at 12:33 AM No comments: