It's Screamin' Jay Hawkins, and he's a wild man, so bug off! 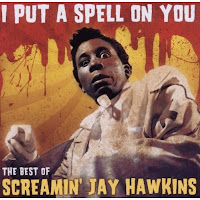 I received the SCREAMIN' JAY HAWKINS greatest hits compilation "I Put a Spell on You" today. Most of the tracks are from 1956-58 and they're just awesome, wild and crazy! This is the shit, baby!! I'm gonna play this record OWL NITE!!! You should do the same.


Here's one of the tracks:

PS: I love the entire Jim Jarmusch movie STRANGER THAN PARADISE but there's one moment in that film which sets the tone of the film: The main character's cousin from Eastern Europe is playing a cassette tape of Screamin' Jay's "I Put a Spell on You" to which the main character comments it's shit music and her reply is the headline. :D
When I watched STRANGER for the first time twenty years ago it was also the very first time I heard that track. I'm still on a never ending Jim Jarmusch trek. this week I bought three of his later films that were missing in my collection. Yay! Spiffy!
Posted by Jack J at 8:57 PM No comments: