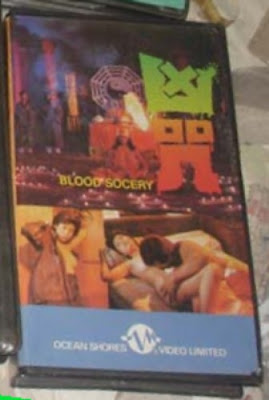 Ahh, yet another dark & nasty Hong Kong horror flick that'll be coming my way soon (I need to pay for it first, LOL). BLOOD SORCERY! This is one I've actually never seen so I have no idea of how good or bad it is. But, uh, I had to have it. I've been after it for a while (you might remember I ordered the TaiSeng version directly from the company a little while ago but it turned out they had tons of VHS titles listed on their site that they didn't actually have anymore!). It's directed by Do Gong-Yue who also did THE DEVIL SORCERY from 1988 which is out on DVD and which I quite like.
Posted by Jack J at 5:15 AM 4 comments: