Yesterday, I received the film GHOST ON THE HIGHWAY about the band THE GUN CLUB and its charismatic frontman JEFFREY LEE PIERCE and being a long time fan I could do nothing but dig into it right away! 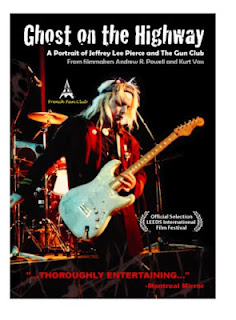 What immediately struck me is a note on the back of the cover that states the film doesn't contain any music by the band whatsoever!! I've later learnt that the director tried to get music from the first two LP's but didn't have the money.

Too bad but in a way it's actually not that much of a loss as it keeps the documentary from becoming somewhat of a concert movie which often happens and which would have annoyed me endlessly. I'd rather see and listen to interviews by the people who where there. And we get that. Actually that's ALL we get!

There are interviews with the original old "disgruntled" (as Jeffrey Lee called them on the back of the cover of the album "Danse Kalinda Boom") members WARD DOTSON, TERRY GRAHAM and JIM DUCKWORTH. DEE POP (who was in the band on the "Death Party" EP is there too and thankfully also KID CONGO POWERS (who was also in THE CRAMPS of course). The always interesting HENRY ROLLINS is there too and so is MIKE MARTT from the awesome band TEX AND THE HORSEHEADS. 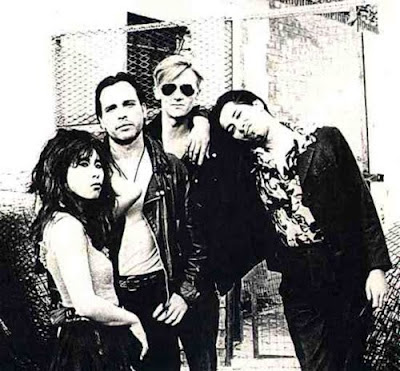 And there are more people who dealt with Jeffrey and the band too. Oh, and LEMMY from MOTÖRHEAD is interviewed (at a bar of course) but, uhh, don't get me wrong I love Lemmy and Motörhead but I fail to see why he's in the film. He's got nothing to say about the subject matter and he probably never even met THE GUN CLUB.

In about 95% of the film everyone talks shite about Jeffrey Lee and says what a cocksucker he was (except for Kid Congo) but I guess that's alright if that's how they feel. I would rather they spew out bile than give us the usual polished Hollywood bullshit in which previous back-stabbers kiss arse to make it seem like they were the main character's fucking soul mate or some such. You're hardly gonna get THAT impression of neither Ward Dotson nor Terry Graham after this documentary. I'm not blaming them by any means. If everyone says he was a dick then chances are he probably was.

But on the other hand sometimes the best and truest artistic creations come from people who lack basic skills in the social department. Artists who focus all their energy on creating something unique. And the music of Jeffrey Lee Pierce has been amongst my fave music for almost 30 years now and I don't see my love for that change just because it turns out he was a dick.

However, having said that, I do wish they would have found some old interview bits of Jeffrey and given him his own voice so to speak. He doesn't get to say his own piece in this film while almost everyone else is dissing him and that's not fair. It's a one-sided story.

Anyhoo, this is a crappy review so I suggest you go here and here to read some more incisive ones. The film runs around 96 minutes and despite its shortcomings it is highly recommended.

I ordered the DVD from CDBABY in the States. 25 dollars + postage.


By the way, I actually got to see THE GUN CLUB once. Like Jeffrey Lee Pierce I spent the late 80s in London and in 1990 I saw them at the Town & Country Club. I bought the "Mother Juno" LP the same year (check out the awesome track from it that I'm posting here). There were a couple of support bands, one of them being THESE IMMORTAL SOULS. I had the bootleg poster from the gig (it cost £1!) on my wall until very recently.