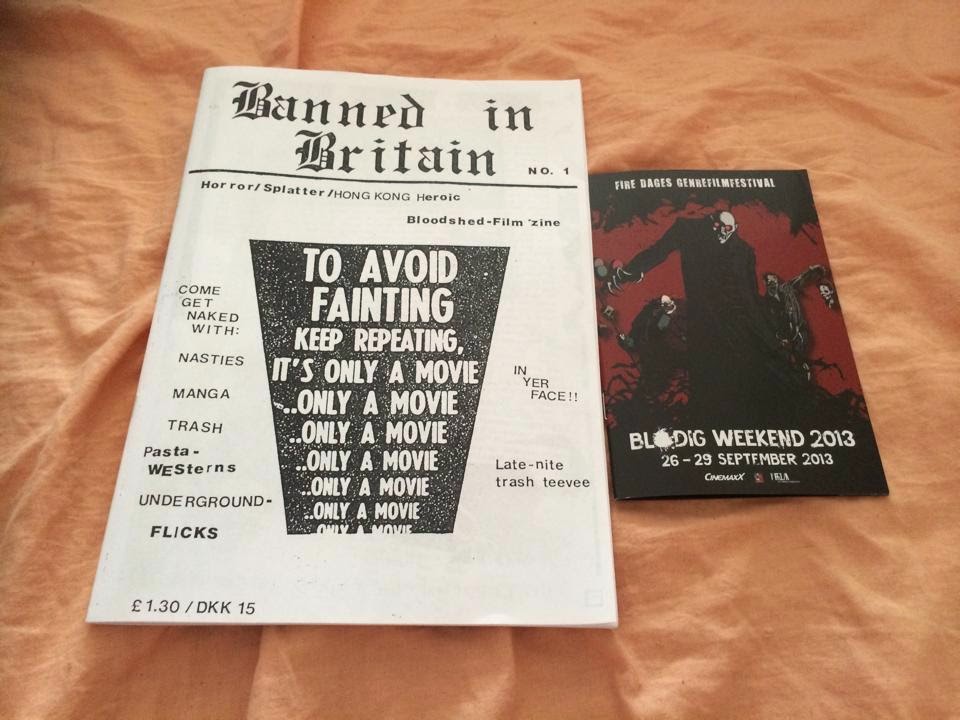 As I'm sure a few of you know the zine was Banned in Britain.
It was photocopied.
Black & white.
Typed on a typewriter (I didn't own a computer till sometime in the late '90s).
Cut and pasted.
And the pictures were pulled from other magazines and books.
The layout was your typical chaotic punk zine look.
32 pages in A5 format.

A film friend of mine offered to xerox the mag at her work. We had to be careful that no-one would find out, so we did it late one night after midnight. We printed 150 copies. 100 with black & white covers. 50 with red covers. I've later printed up another approximately 50 copies. A total print run of 200 copies. Now, that's underground!

Apart from the copies I shipped out myself I had three - maybe four - zine distributors, Rage Distribution in Norway and two distros in the UK. I forget the names of the UK distros. And I even forgot to get payment from one of them. Haha. Now that I think about it one of them actually ripped me off of the shipment payment. He asked me to pay for shipment to the UK and then refused to pay for the return shipment (my payment was magazines from his catalogue). Arsehole! I should find him and demand a refund!
I'm not sure if Simon Nielsen in Denmark also distributed Banned in Britain via his "Full Family Entertainment" distro (or whatever it was called). He might have.

Rage in Norway was run by Thomas Eikrem who did a zine called Rage. Rage is actually still around now in its second volume, altho now as a book edition (a very expensive book edition I might add!). Thomas was the first distro guy I got in touch with. He asked if I wanted to be paid in cash or choose stuff from his distro. I picked Michael Weldon's original Psychotronic book and a handful issues of the Psychotronic Video magazine.

Putting out Banned in Britain #1 in 1994 was a blast. It felt good. I had wanted to be a zine editor for a long time. I think the urge was already spawn when I bought two issues of a Danish thrash metal fanzine called Metallic Beast in (I thiink) 1986. And in 1987 Lars Krogh sent me the first issue of his punk zine Moshable. Lars later launched his Bad Afro record label (which is still running) and his co-editor, Simon Nielsen, wrote a handful of reviews for Banned in Britain #1.My friend who printed the first batch of issue one was a horror film friend that I'd hook up with for late night video nights two or three times a year. My way of saying thanks was to list her as the co-editor but in reality she didn't have anything to do with the contents other than to xerox the pages as I mentioned. She lived in a different part of the country and it was somewhat of a travel to meet. We lost touch in the mid '90s. Then around 6 months ago she suddenly pops up again out of nowhere. We spent an evening chatting online about the old days and then... poof! She was gone again.

Even though it was awesome to publish a fanzine it kind of didn't last. On one hand there was too much trouble putting the stuff together and getting it printed. I had no money to do a new issue and besides I was basically just too bloody lazy. And also, if you ever hear a fanzine editor talk about how cool it was to type stuff on typewriters instead of a computer they're either full of shit, have drowned one too many pint to actually remember the old days, or maybe they weren't there in the first place. Doing a fanzine on a bloody typewriter was a fucking pain in the ass! Trust me, it was. I didn't get another issue off the ground until a full decade later. Issue No. 2 came out in 2004, same size, same original print run, same page count and format.

And now it's 2014 and yet another decade has slipped thru the cracks of time. Down the drains? Well, zine wise yes cos I still haven't gotten better at putting out new issues. And to tell you the truth, I hadn't actually thought about the fact that it's been 10 years until Nigel of Aenigma! zine asked me if I was going to put out a new one since it's 2014. And my buddy over in the UK (and sometimes Germany) Pete Davies (of Mondo Squallido and Mattei of the Dead fame) had been bugging me to do reprints of my old zines so he could get them. I tried to reprint a pile BiB #1 in A4 size last week at work but messed up the setting on the Xerox machine and ended up with only ONE copy in A4 and a handful in the original A5 size. I sent the A4 copy to Pete a few days ago (along with a copy of the Bloody Weekend horror film festival booklet). It's Pete's facebook picture you seen in the above. I wanted to do A4 copies as the print is way too tiny in the original A5 edition (and with my now less than perfect vision I have trouble reading the A5 copy even with my reading glasses on!). Maybe I'll get another chance - or maybe Pete's copy is gonna be the only one in existence forever and ever.

And what about future issues? I can't tell you, I simply don't know if there'll be another issue of BiB. But if there is it'll be this year in order to keep the 10 year distance between each issue. I've decided that if I don't put out BiB #3 this year I won't do it at all. It's either this year or not at all. BiB #2 from 2004 could very well be the final issue. Let's wait and see. But still, 20 years of Banned in Britain and people still ask me about reprints, that's pretty rad!!!

Oh, and yesterday I spoke to a horror film fan in the UK about the old In the Flesh zine that we both used to buy around 1990. She's got a ton of the old zines, and she's kept them all, and when I mentioned I had published BiB she said, "I've got that zine!!!" Now, THAT is also pretty cool!