Ahh, life is beautiful! I'm on holiday on the continent - and soon, very very soon, I'll be getting THIS: 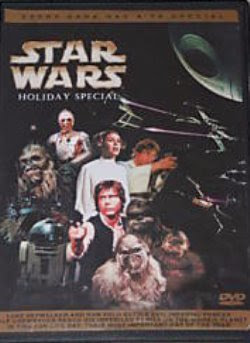 The STAR WARS HOLIDAY SPECIAL from 1978!!!
It's weird; STAR WARS has been such an overwhelming success ever since the first film came out in 1977 but still almost nobody knows about this little seen TV holiday special that was made in 1978 to keep the interest in STAR WARS afloat. It stars the original actors from the real films; Harrison Ford, Carrie Fisher, and maaaybe Mark Hamill (although some Internet sources say it's not actually the real Mark Hamill!!). It's supposed to be the worst pile of shite ever and George Lucas has (allegedly) stated he'd like to smash every copy of it with a hammer. One girl on IMDB wrote: "I lost an hour and a half of my life and really nothing happened during that time other than losing any shred of respect I may have had for George Lucas." This may very well turn out to be true... but by Jove I wanna watch this regardless.
Posted by Jack J at 6:20 PM No comments: