A rare interview with Zoë Tamerlis (aka Zoe Lund) was uploaded to YouTube recently. I'm sure I don't need to tell you Zoë Tamerlis played the lead character in Abel Ferrara's MS .45 and was in BAD LIEUTENANT which she also wrote. Thanks to Derek Steckler for posting about it on Dvdmaniacs.

The interview was made by Ed Grant for a New York cable access TV show called Media Funhouse. He also wrote a piece about the interview which was posted on the station's blog. I'm being sneaky and posting it all here. I hope he doesn't mind. Nor that the TV station does. Nor that their lawyers do. Oh, and by the way, if you read Ed Grant's bio you'll see a lot of periodicals that he's written for. However, his biggest claim to fame (at least on this here site) is, NEEDLESS TO SAY, that he used to write for Michael Weldon's Psychotronic Video. :D

The strangest celebrities sometimes show up at genre fan cons. Such was the case when Zoe Tamerlis, aka Zoe Tamerlaine, aka Zoe Lund, showed up at the Chiller Theatre convention back in 1997. Tamerlis will forever be best known as the star of Abel Ferrara’s kinetic and disturbing action-vengeance pic Ms. 45 (1980), which is a fusion of Death Wish and Taxi Driver. She was also a very sad drug casualty, as she died at 37, after what is referred to on several websites as “extended cocaine use, which replaced her prolonged heroin use.” She was an uncommonly beautiful model-actress who made only six features, and scripted one of Abel Ferrara’s finest works, Bad Lieutenant (1992).

When I spoke to her, she was 35 and extremely nervous. Some of this no doubt came from having to sit at a very busy convention trying to hawk rather bleary photographs of herself (she agreed to do the interview in exchange for me buying one — which I planned on doing anyway). She brought up the subject of drugs herself in the context of speaking about Keitel’s “nod” scene in Bad Lieutenant, and I must admit I was too shy to actually probe the issue, as her hands were rather shaky and had bruises on them, she was feverishly chain-smoking, and was wearing a dark mesh top that was see-through, which I didn’t realize until the interview had already begun.

She leaves behind indelible film images in the films of Ferrara (who himself has seemingly left narrative linearity behind in recent years), as well as Larry Cohen’s Special Effects. She did speak about her heroin use in a documentary about the supermodel Gia, which can be seen here. More about her life can be found here and at a very thorough site created by her husband Robert Lund at www.zoelund.com


PS: The reg. 1 US dvd is cut. The French dvd is fully uncut and has English audio. It's available from Amazon.fr under the title "L'ange de la vengeance".

NB: Yes, this post is partly a reprint as I want more people to know about this rare interview and nobody reads old blog posts anyway.
Posted by Jack J at 3:40 AM 2 comments:

[I think this is a cardboard cover version] 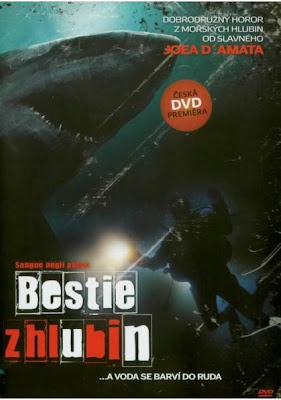 [this is the ordinary keep case version I received. The other cover looks cooler though!]


I watched Joe D'Amato's JAWS ripoff DEEP BLOOD (original title: Sangue Negli Abissi, Czech title: Bestie Z Hlubin) yesterday and I must say it's not the world's goriest nor most scary shark movie, haha. However, it was alright. If you want lots of shark attack scenes then, well then you'll get mighty disappointed as there's a lot of stuff going on land but less (much less) happening on the sea. Someone mentioned that the film almost has a plot! (in some grotesque Bizarro World version of the Batman 1960s TV show an enthusiastic narrator utters frantically WHAT IS THIS?? ... A PLOT?? IN AN ITALIAN JAWS RIPOFF??? CAN IT REALLY BE?????? Haha.

The DVD I watched is from the Czech Republic and apparently it's the only DVD relase there is. It's fullscreen but even so the picture looks alright. The DVD is released by the Ritka Video label which also was the first company to put out Bruno Mattei's last two zombie movies, ZOMBIE ISLAND & ZOMBIE: THE BEGINNING, anywhere in the world! They've also put out Franco E. Prosperi's WILD BEASTS, unfortunately only with Czech and French dubbing. Recently I was lucky and got hold of the English dubbed NTSC tape in good condition. I got the Czech DVDs from this store (they don't take PayPal, only banktransfer).

Unfortunately I couldn't find a trailer for DEEP BLOOD on YouTube so instead here's the trailer for Bruno Mattei's CRUEL JAWS which uses scenes stolen from DEEP BLOOD anyway, LOL (and from The Last Shark, Jaws, and Jaws 2!!!).