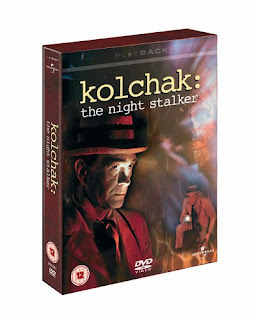 I received the KOLCHAK: THE NIGHT STALKER complete series boxset today. Yay!! Spiffy!!! I've wanted this show for years!! But there's too many movies in this world so that's why I haven't got around to ordering it until now. Now it's here and whoo-hoo for that.

I've never watched any of the episodes before but I've watched the telly movie and the pilot that preceded the show and found those two to be really good. KOLCHAK: THE NIGHT STALKER ran over the US TV screens in 1974-75. Twenty 60 minute episodes! Maybe 20 episodes doesn't sound like much compared to other shows but even so it became a cult show that people are still talking about. I watched episode #1 tonight and I look forward to the remaining 19!!

The basic plot: Carl Kolchak is a newspaper reporter and for some reason he usually runs into unusual cases. In the first episode he's up against "the ripper" (who happens to be Jack the Ripper hisself who has survived since 1888!!). Some of the other episodes are called: "The Zombie", "The Vampire", and "The Spanish Moss Murders"!

As I said there are two TV films that were made before the show; THE NIGHT STALKER from 1972 and THE NIGHT STRANGLER (i.e. the pilot) from 1973.

The two TV movies are released on a reg. 1 MGM DVD but unfortunately it's out of print and it's now so expensive it's ridiculous!! Fortunately I bought it years ago and probably paid something like 10 bucks for it.

The complete TV show (which doesn't include any of the two TV films) is out on DVD in both the US and the UK. Both sets are complete and if you need subtitles (Spanish & English) you'll need the reg. 1 set but otherwise I'll recommend the UK set at it contains the original versions of all episodes. The show's original title in the first four episodes was "The Night Stalker" after which they changed the title to "Kolchak: The Night Stalker". When the show was re-run in the US they changed the title card in the first four episodes and the reg. 1 carries the altered versions. The UK set, on the other hand, uses the original versions. I know-I know, not much of a difference but, hey, THIS SHIT IS IMPORTANT to film geeks like you and me. lolz.

Also, the reg. 1 box presents the 20 episodes on 3 flipper discs whereas the UK set has 5 ordinary discs. There's no extras (and do notice the UK set isn't subtitled).

There was a remake a few years back but I haven't watched it and I seem to remember it bombed.

I got the KOLCHAK set from Amazon UK where it retails for around £10. The video company Playback/Universal have released it in two different cases; the one described on Dvdcompare.net is different to the one I received (one plastic box, not three slimline cases in a cardboard slipcase) but I believe the discs are the same.
Posted by Jack J at 10:14 PM 3 comments: