Directed by: Pierluigi Ciriaci (as Frank Valenti)
Note: the Danish VHS cover clearly lists "Ted Kaplan" (aka Ferdinando Baldi) as the director on the front of the cover but this is clearly not right. 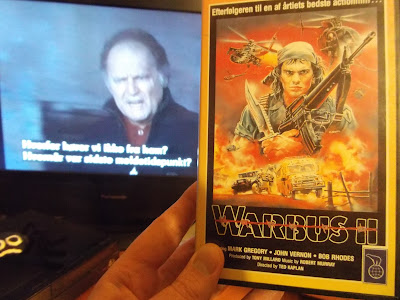 Yesterday, Don Gordon Bell commented on my post about the original film WAR BUS that Ferdinando Baldi directed (as "Ted Kaplan") in the Philippines in '85 and that Don starred in. WAR BUS is good fun and very entertaining. I knew I'd had a Danish sell-thru VHS tape of a film that the cover calls "Warbus 2" sitting on my shelf for a really long time. And since I'm going to update my 9 year old post about the original film anyway, I figured it was as good a time as any to watch this sequel. Or rather the film that my Danish video tape sold off as a sequel to Baldi's original film anyway. Hell, the blogs I checked out before watching the film also refer to it as somewhat of a sequel, either in retitle or as an unofficial follow-up. After having watched the film I think I can tell you with 100% ... no, change that to 300% ... certainty that this is a sequel in distribution retitle only! Haha. 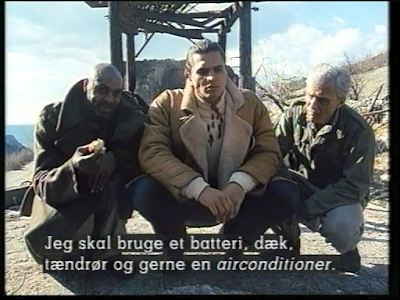 The good people over at Blood Brothers Reviews blog state in their review that the film was released in Italy as "Warbus 2". But I've checked various Italian web sites and it seems the film was actually released in Italy under the English language title of AFGANISTAN - THE LAST WAR BUS. The onscreen title on my VHS also carries this title (notice it does spell Afganistan without a H). However, the Italian sites also include "L'ultimo bus di guerra" in brackets after the title. I reckon this is just a translation by the Italian sites (and maybe even provided the film studio) to explain to non English speaking Italians what the title means. The fact that the IMDb also includes this Italian translated title as though it's part of the title doesn't mean much to me. It's just a translation of the title, not actually part of the title. I think most of you have figured out by now that the bloody IMDb is as reliable as a wet piece of spaghetti for bungee jumping. They also call it an Italian/American coproduction for crying out loud, simply because there's an American (John Vernon) in the film. 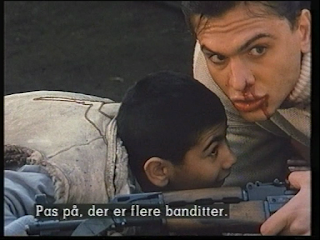 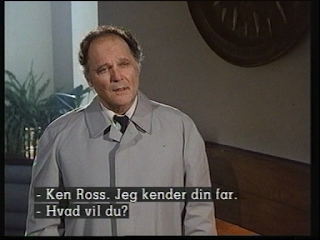 Mark Gregory plays Johnny Hondo, a Green Beret who's sent to outskirt places to rescue American prisoners of what ever local conflict they've gotten themselves into. He's just returned to the US after one such mission (that kicked off the film so we had something to look at while the intro credits ran). Upon his arrival home he's told his dad is in hospital. On his death bed Johnny's father, a high ranking US soldier, tells his son that soon he'll be asked to go on a mission and that it's an impossible mission. In other words, Papa Hondo tells his son to commit suicide just in order to save Hondo Senior's reputation. Great dad, huh!

Anyhoo, Johnny hooks up with the army guy who's played by John Vernon and he informs Johnny that 9 years earlier his father was in Afghanistan when the Russians invaded the country and things began to heat up. Hondo Sr. got hold of some mucho importanto papers that the American government would like to get their hands on. But he had to leave them behind, hidden in ... a school bus. Now it's Hondo Jnr.'s job to go in, get the papers, and get out again.

The rest of the film is said trip to downtown war torn Afghanistan. Somewhere along the line Johnny Hondo befriends a local teenager and saves two American POW's. They find the school bus and although it's a slow moving motherfucker they decide to use it to transport them back to civilisation. And nothing can stop this old heap of junk; not Russian army helicopters, tanks, machine guns, bazookas, fire, hand-grenades, foul language, nothing!!! One of the two POW's is played by Bobby Rhodes who you'll recognised if you're into horror films; he was the black pimp in Lamberto Bava's DEMONS! 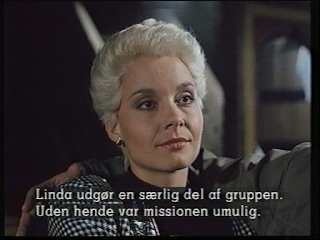 AFGANISTAN - THE LAST WAR BUS is written off by most blogs as pretty shitty. The three reviews on IMDb all write it off as drek as well. And no, it's not great by anybody's standards but I must admit I was entertained (but then again I'm entertained by poking sleeping dogs with a stick). Most of the problem is basically ... Mark Gregory. He's got as much personality as the tin of chopped tomatoes that I'm going to use for my dinner tonight. He would have been perfect as cyborg in Italian post-apocalypse movies. Mark Gregory makes Steven Seagal look like Robert de Niro. But even so, he's actually been in quite a few cool Italian genre flicks; 1990: THE BRONX WARRIORS, ESCAPE FROM THE BRONX, THUNDER 1-3 (aka Thunder Warrior 1-3), JUST A DAMNED SOLDIER, DELTA FORCE COMMANDO, TEN ZAN - ULTIMATE MISSION. 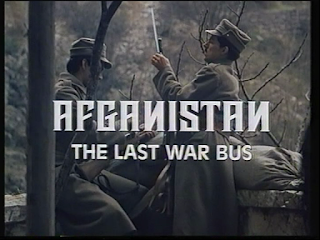 Also, another problem is they dubbed John Vernon. Vernon has that there special voice of his - and they fucking dubbed him. What were they thinking! The best actor in the film is actually Bobby Rhodes. In addition to DEMONS and DEMONS 2 he has been in heaps of Italian genre movies and he's still working in the business.

The plot was most likely written on the back of a matchstick box and they couldn't read half of it cos the box caught fire. This film isn't gonna be on anybody's favourite film list anywhere in the world. Even some kid who's only got this one tape in his collection and who lives on a deserted island isn't gonna hold it as his fave film. I'm not exaggerating. Earlier I talked about how it's not a sequel but if you must count it as a sequel to WAR BUS it actually becomes even worse because the first film is a masterpiece in comparison. The reviewer on Blood Brothers Review blog pointed out that AFGANISTAN - THE LAST WAR BUS was one of the very last Italian "Macaroni Combat" films and yeah you can sorta see how this RAMBO rip-off genre had run its course by the end of the 80s. It had a good run though. Unfortunately, the only place Warbus 2 is going to be remembered as a classic is in Bizarro World.