Message From Space on DVD 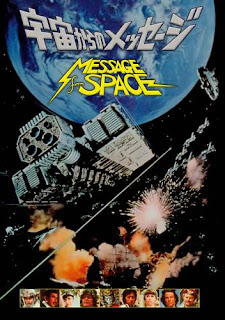 A hundred years ago I got a VHS dupe of this film from Henrik Larsen (Obskuriøst magazine) off the English dubbed Danish VHS, and now it's finally been released on DVD by Discotek Media. The film is a cool Japanese STAR WARS ripoff from 1978 starring among others Sonny Chiba and Hiroyuki "Henry" Sanada. It's directed by Kinji Fukasaku who also did THE GREEN SLIME and BATTLE ROYALE (to mention two rather different films, LOL).

OFFICIALLY LICENSED IMPORT VERSION! THIS IS AN AUTHENTIC, LICENSED DVD. Contains both the Japanese language version with English subtitles and the English language versions! Plays on all DVD players. The peaceful planet of Jillucia has been nearly wiped out by the metal skinned Gavanas, who's leader Rockseia XLL takes orders from his old wretched mother. King Kaiba sends out eight Liabe holy seeds, each one to be received by a chosen one. Its up to these special warriors to save mankind from the Galvanas attack. Starring Sonny Chiba, Vic Morrow, Hiroyuki Sanada, and Tetsuro Tanba. Directed by Kinji Fukasaku (Battle Royale)

THIS CLASSIC HAS BEEN UNAVAILABLE ON DVD UNTIL NOW!