I've written about the longer French DVD release of the wild Korean film FIREFIST OF INCREDIBLE DRAGON before but I've never compared it to the shorter English dubbed version found on UK DVD. Fortunately, Cinehound member Resonator05 has done it for me now:

I have now compared the French and UK DVD's of Firefist of Incredible Dragon and here are some infos:

The French DVD (French audio only) is a joke. The cover claims the picture has been restored - there is even a short featurette about the restoration (lol) - but the quality is extremely bad. Even if fully letterboxed (but 4:3), the picture is extremely dark (yes, so dark that sometimes you can hardly see anything), very corny and simply very bad, it looks like crap. The guys who restored this fucked it up big way.

Anyway the French DVD runs 87:58min, which is 12 minutes longer then the full screen UK cheapo disc (76:02). There are quite some dialogues and other stuff cut (maybe to save dubbing costs for the English export version), but also cuts to sexual violence (thanks to the BBFC I guess).

The main censorship cuts are at minute 30 (French DVD) when a woman is forced to sex and the biggest cut at around minute 39 (French DVD) when some women are bound and tortured, involving lots of nudity, full frontal nudity and women suffering. The torture is not seen in a gory way, it is mostly off-screen (a pin moved to a naked woman's body), but this scene which lasts 1-2 minutes has been removed completely.

So, that is it. I would prefer the UK DVD any day, simply because of the hilarious dubbing and the picture being much brighter (even if still shitty). Also it moves faster and all the gory scenes are intact. Have a nice day :-)

Big thanks to Resonator05!
Posted by Jack J at 6:38 AM No comments: 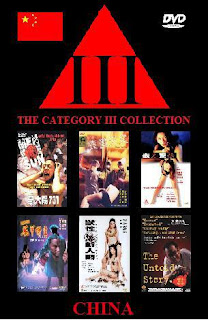 Here's another terrible cover from a bootlegger who didn't bother to find out what he's selling. These films are by no means from China. CHINA DOESN'T HAVE A CATEGORY III RATING, hahaha. It only exists in Hong Kong.

The argument that China has now taken over Hong Kong isn't valid either as altho Peking has final say-so Hong Kong is a territory of its own with own Government, currency and flag. Oh, and the flag on this bootleg is the wrong one, hahaha. China's flag isn't used in Hong Kong. Not surprisingly the Hong Kong flag is used in Hong Kong.

Also, even IF we were to label Hong Kong film as being from China it would still be an invalid argument as these films were made before the Peking takeover in 1997. In other words they should be called BRITISH films as Britain ruled Hong Kong prior to 1997. But of course no one would do that.

I commented about it in connection with the cover on the bootlegger's Facebook page but I didn't get a reply (somehow I'm not surprised). LMAO.

Check my first post about a crappy bootleg cover here (that one is almost surreal!).
Posted by Jack J at 5:21 AM No comments:

Now, why would you watch a two week old news programme from C4? o_O
Yeah, it's about punk! There's a new book that reprints the old "Punk" zine and there's an interview with Henry.

Oh oh oh!!! and there's a TOYAH interview!! Me and my cousin Ronny were huge Toyah fans (I was a member of the fan club, lol).
Posted by Jack J at 2:31 AM No comments: