Tura Satana has passed away. For the official website go here.

Tura in action in the film that John Waters called "the best film ever made". Yeah, I agree. And Tura was the coolest chick ever in that film. RIP.
Posted by Jack J at 11:40 PM No comments: 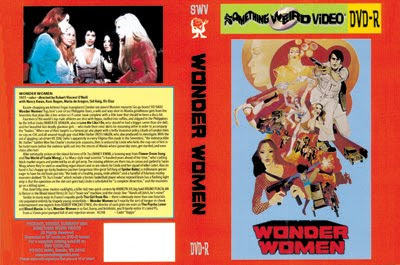 I'm getting a couple more DVDs from Something Weird Video in the US; the first one is the Filipino flick WONDER WOMEN from 1973.

Fourteen of the world's top male athletes are shot with hypos, stuffed into coffins, and shipped to the Philippines by the lethal Linda (MARIA ARAGON, also in Love Me Like I Do, who should've had a bigger career than she did), and her beautiful-but deadly glamour girls -- who trade their mini-skirts for mourning attire in order to accompany the "bodies." When one of their targets is a famous jai-alai player with a hefty insurance policy, Lloyds of London hires ex-cop, ex-CIA, and all-around-tough-guy-stud Mike Harber (ROSS HAGEN, who also produced ) to investigate. With the aid of giggling cab driver VIC DIAZ (who's apparently in every Filipino film made in the Seventies), "the indestructible Mr. Harber" battles Won Ton Charlie's motorcycle assassins, then is seduced by Linda who kicks the crap out of him in his hotel room before the violence spills out into the streets of Manila where passerby stare, get startled, and even chase after her!

Mike eventually arrives at the island fortress of Dr. Tsu (NANCY KWAN, a looooong way from Flower Drum Song and The World Of Suzie Wong), a Su-Muru-style mad scientist "a hundred years ahead of her time," who's selling black-market organs and protected by an all-girl army. The missing athletes are there too, in comas and garbed in Saran Wrap, where they're used as unwilling organ donors and as sex robots fo Linda and her squad of killer cuties. Also on hand is Tsu's happy-go-lucky business partner Gregorious (the great Sid Haig of Spider Baby); a millionaire geezer eager to have his old brain put into "the body of a healthy, young, virile, athlete"; and a handful of hilarious motley monsters dubbed "Dr. Tsu's Freaks" which include a former basketball player whose exposed brain has a flashing light atop it. But the operation on the old coot goes bad, Linda is scheduled for "a complete dissection," and the monsters go on a killing spree...

Similar in many ways to Franco's equally goofy The Girl From Rio -- there's obviously more than one futuristic city populated entirely by shapely young centerfolds -- Wonder Women isn't exactly the sort of tongue-in-cheek entertainment one expects from ROBERT VINCENT O'NEIL, the director of such grim sex-noirs as The Psycho Lover and Blood Mania. In fact, Wonder Women is so fast, funny, and fetishistic, you'll barely notice it's rated PG>
From a 35mm print pumped full of anti rejection serum.
-- Cadet Happy 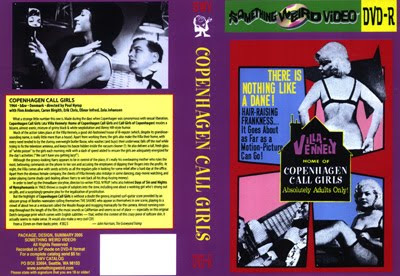 - and the second one is COPENHAGEN CALL-GIRLS aka Villa Vennely which I've wanted to get for ages! The problem is it's pretty difficult to order film thru their site as SWV don't accept credit-card payment from outside of the US. Anyway, I'm getting it now and woo-hoo for that! My friend Kristian R, who's a second generation Dane in the US, tells me SWV's 35mm print looks better than the old Danish ex-rental tape. One site wrongly stated the SWV print is dubbed into English. This isn't true at all, the print is in Danish and carries the old, original English language cinema subs.

What a strange little number this one is. Made during the days when Copenhagen was synonymous with sexual liberation, Copenhagen Call Girls (aka Villa Vennely: Home of Copenhagen Call Girls and Call Girls of Copenhagen) exudes a bizarre, almost exotic, mixture of grimy black & white sexploitation and Benny Hill-style humor. Much of the action takes place at the Villa Vennely, a good old-fashioned house of ill-repute (which, despite its grandiose-sounding name, is really little more than a house). Apart from working there, the girls also make the Villa their home, with every need tended to by the clumsy, overweight butler Basse, who washes (and buys) their underwear, falls off the roof while trying to fix the television antenna, and keeps his booze hidden inside the vacuum cleaner (!). He also delivers a tall, fresh glass of “white poison” to the girls each morning: milk with a dash of speed added to ensure the girls are adequately energized for the day’s activities (“We can’t have you getting lazy!”). Although the groovy-looking Harry appears to be in control of the place, it’s really his overbearing mother who rules the roost, bellowing commands on the phone to her son and accusing the employees of dipping their fingers into the profits. At night, the Villa comes alive with seedy activity as all the regulars pile in looking for some relief after a hard day at the office. Apart from the obvious female company, the clients of Villa Vennely also indulge in some dancing, stag-movie watching, and poker playing (some shady card dealing allows Harry to win back all his drug-buying money). In order to beef up the threadbare storyline, director/co-writer POUL NYRUP (who also helmed Days of Sin and Nights of Nymphomania in 1963) throws a couple of sub plots into the stew, including one about a working girl who’s strung out on pills, and a surprisingly genuine plea for the legalization of prostitution. But the highlight of Copenhagen Call Girls is without a doubt the groovy, inspired surf-guitar score provided by an obscure group of Beatles-wannabes calling themselves THE SHARKS who appear as themselves in one scene, playing to a crowd of about ten at a restaurant called the Moulin Rouge and mugging maniacally for the camera. Almost running non-stop throughout the length of the film, the music sounds so Californian and seems so out of place -- especially on this original Dutch-language print which comes with English subtitles -- that, within the context of this crazy piece of softcore skin, it actually seems to make sense. (It would also make a very cool CD!) From a 35mm on-their-backs print. #3823 -- John Harrison, The Graveyard Tramp