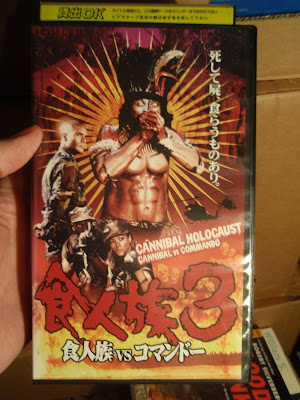 Bruno Mattei's two last cannibal movies (that are among his much neglected post 2000 movies) were LAND OF DEATH (2003) and CANNIBAL WORLD (2004) were probably the last of his films to come out on video tape. And only in Japan! His later film, including THE JAIL: A WOMAN'S HELL, ZOMBIES: THE BEGINNING, THE TOMB, and ISLAND OF THE LIVING DEAD didn't make it to VHS as far as I'm informed (and neither did his post 2000 soft-porn films but I don't know much about those). Feel free to correct me but I've certainly never seen any video releases of any of those films. His last film was ZOMBIES: THE BEGINNING from 2007. A third film in the series was planned by sadly Mattei passed away before it was made. So sad. We could have had yet another masterpiece by this true il Maistro di italieno horror film. ^_^

I already had the two films on DVD (one on official Japanese dvd and the other on American bootleg from Pan-something off the Japanese dvd). But when I saw the other vhs versions from a seller in downtown Japan I knew I had to have them. Yay! Both tapes are ex-rentals and both carry English dubbing with Japanese subs. You'll notice there's a plastic box with the tapes in them inside the case itself. This is something I believe only existed in Japan and was a way for rental shops to be able to on one hand quickly get the tape out of the case and at the same time let the customer rent the tape in the plastic box while the case (and the cover) stayed in the shop. This way other customers could see and (I would assume) pro-order renting the tape once the first customer delivered it back.

If you look at the covers you'll notice the two films were marketed at sequels to CANNIBAL HOLOCAUST, the Japanese titles carry sequel numbers 2 and 3 and the Japanese title itself is the same as for CH. Also the English (i.e. English in Japan) titles were changed to resemple sequels; LAND OF DEATH became "Cannibal Holocaust: Cannibal vs. Commando" while CANNIBAL WORLD became "Cannibal Holocaust: The Beginning" (notice: the Japanese titles include the sequel numbers but the English titles don't). Bruno Mattei's two late cannibal films are fun on a very trashy level but there's no way in hell that they compare to Ruggero Deodato's masterpiece from 1980. 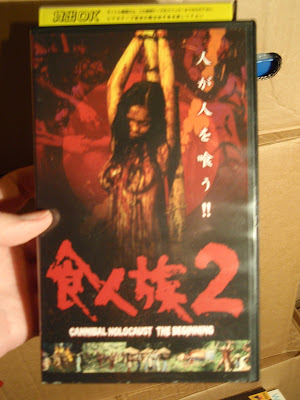 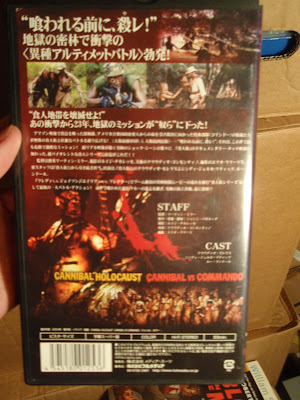 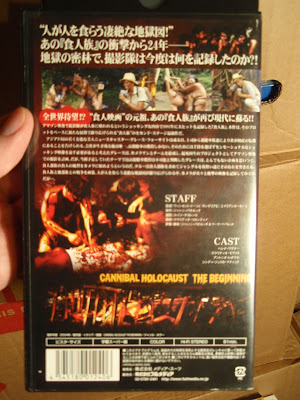 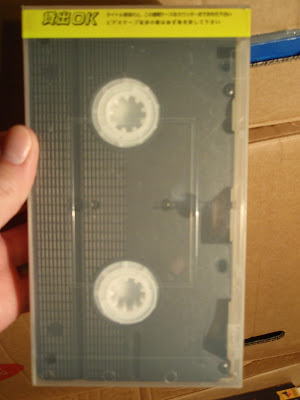 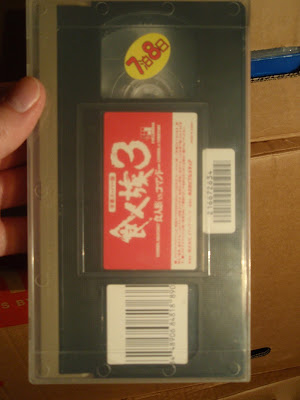 - and check this crazy trailer...