I have finally updated my post about Fred Adelman.
Posted by Jack J at 6:46 AM 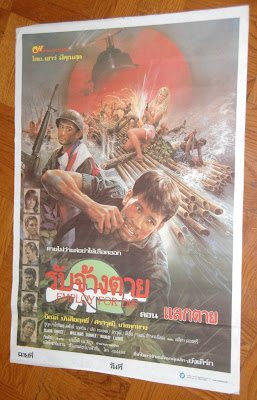 Finally a bit of a breakthrough!! Not the video-cd I've been trying to hunt down for the past 2 years but the Thai poster for the film!!! I found it on eBay and scooped it up right away. This is the mythical sequel to CANNIBAL MERCENARY aka THE MERCENARY aka EMPLOY FOR DIE. One of the rarest fun and trashy war video nasties from Asia (i.e. Thailand). It seems nobody has this sequel!! As far as I know it's only ever been released on a Thai VCD. This poster reveals three gwailo names that aren't mentioned on the VCD cover (which I have a mere scan of from a Thai film site): Black Direct, Williams Summer, Audrey Laurie (if I'm reading them right that is).

The first CANNIBAL MERCENARY is only released uncut on VHS in the States (a very rare tape by now). There's a German DVD but I'd stay away from that if I were you. The Germans licensed the Hong Kong version that has been given the Tomas Tang treatment, i.e. they cut out a lot of gore and dialogue scenes, and added crappy new footage of Westerners and changed the dialogue. Screw the German DVD and get a bootleg DVD-R of the US tape instead! The original VHS is close to impossible to find nowadays. I had to pay thru the nose to get my own copy.
Posted by Jack J at 12:48 AM No comments: