Recently I've received a couple of emails from people asking if I still have copies of my old splatter/horror/trash movie fanzine Banned in Britain laying around. And yes I sure do, a whole pile collecting dust actually so since I'm not using this blog for anything else at the moment I thought I might as well give the ol' rag a plug. 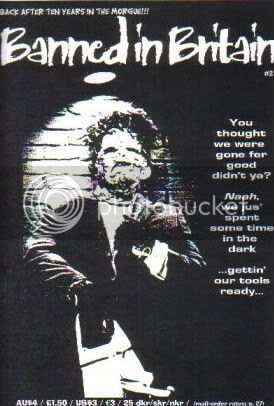 I started publishing Banned in Britain ('BiB' among friends) way back in 1994. It was inspired by the old UK zine In the Flesh that I use to buy when I lived in London in the late 80s. BiB #1 was reviewed in the final issue of the Danish (almost pro-mag) zine Inferno that came out in '94. This all happened back in the days of type, cut & glue-fanzines. Before the Internet (yes, dear young reader, there was a time, in the longlongago, when man didn't have Internet!) and before those shiny little discs called dvd's were invented (I'm not pulling your leg here, we really didn't have dvd's back in the old century either!). In those early days when all we had was video tapes (also referred to as vhs!!) that was when BiB arose from a tormented earth to ravage amongst men of... alright, I'm rambling (again) but to cut the chase short I put out #1 in 1994, sat around on my arse for ten years and put out #2 in 2004, and #3... well, the world is still awaiting that one (i.e. doesn't give a rat's ass). In 1999 I started publishing another zine called Stay Sick! but that's an entirely different story. BiB is where it all began.

No.1 is long gone but as I said I've got heaps of #2 left. 32 pp filled with my ravings about horror, gore and trash movies. There's also something on Slayer (the legendary thrash metal band, in case you didn't know) and reviews by renowned Danish cartoonist Lars Kramhøft. $4/€3 postpaid anywhere in the world. I take PayPal. Just shoot me an email. And before you ask, no I have no idea when issue no. 3 will be out but since it has recently dawned on me that there are almost no horror movie mags (and certainly no fanzines) left I'm beginning to think it's time to revive this so there'll at least be one old-skool splatter mag around! (NB: obviously I'm talking about REAL magazines printed on good old-fashioned dead wood, i.e. paper, as there's, of course, heaps of stuff in Cyberspace).
Jack
Posted by Jack J at 8:15 AM 2 comments: