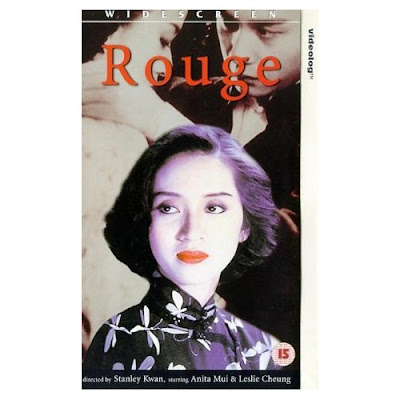 If you've been with me for a while you'll know that I'm trying to make a complete list of releases from the old UK video label MADE IN HONG KONG, complete with index numbers, language info, cut versions, etc (otherwise read about it here). However, it just got more complicated!!

I've just got hold of this UK VHS release of the excellent (and sad) film ROUGE. The reason I bought it was to get the film in its original format; the new(ish) DVD from IVL has had its top and bottom cut off for some reason. I guess to make it look even more "letterboxed" than its original widescreen format. Go figure.

The old DVD releases are presented in the film's original format (at least that's what I've read) but unfortunately I haven't been able to find any of those anywhere. So I settled for a VHS which was released by a company called BlueLight but to my big surprise it turns out this video release is exactly identical to any of the Made in Hong Kong tapes!!

Everything down to type of font, the way to write index number and all. And also the inside of the cover has info by Bey Logan and there's a list of the tapes that were currently available from MIHK at the time. Also, ROUGE is listed as being a MIHK release. But it wasn't! So I guess the people behind the MIHK company set up another line as well and for some reason included ROUGE in this and not in the Hong Kong series which is odd to say the least!

On the tape there are trailers for some of the other BlueLight releases and they're non-Asian films. So it seems the MIHK guys wanted a kind of "world film" series as well. Cool enough but this just means there's gonna be more titles to track down and I have no idea where to begin. Try looking for "Blue Light" via Google search!

I've been trying to get help from members of Cinehound and Asian Dvd Guide but not a whole lot of people have been able to help as they either don't collect sell-thru crap (haha) or don't collect video tapes at all. So obviously I'm not too hopeful in regards to someone turning up with a complete list or anything but if any of you have any tapes from this line and can provide title(s) + index number then that would be just smashing! Cheers.

Labels: a: Hong Kong flicks, Made in HK list 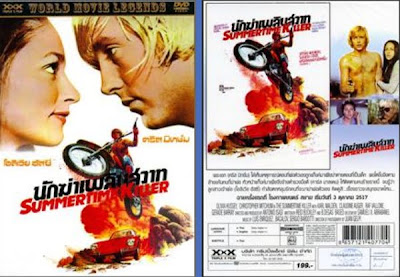 I've just finished watching SUMMERTIME KILLER (aka Un verano para matar) which stars Chris Mitchum, Olivia Hussey and Karl Malden. It was made in Spain in '72 and is directed by Antonio Isasi which I'm afraid is a director that I'm not too familiar with.

EDIT: What I didn't realise at first is I actually watched (and liked very much) another film that he directed called THE DOG (aka A Dog Called Vengeance/El Perro) about this guy who is ... being hunted by this ... dog. Haha. It's actually a very good and creepy film (and if you wanna watch it I suggest you find a video tape and forget about the truly awful American bootleg DVD from VideoAsia!!).

As you might remember I reviewed the Thai film THE H-BOMB last year which also teamed up Mitchum and Hussey and which was an alright and fun flick but I must admit it's taken me a while to put SUMMERTIME KILLER on the player (I bought the DVD a year and a half ago!) cos I kinda expected it to be on the same level as H-BOMB but, whoah, it's in no way "just" a fun (but forgettable) flick like H-BOMB, this is a great movie indeed and I definitely wanna watch it again already and so should you!

Chris Mitchum plays a hitman who bumps off a coupla goons and is on the hunt for a third one. He misses his target and has to reconsider how to finish the job; This is where Olivia Hussey's character unwillingly enters the stage. And then on top of it all there's Karl Malden who a crooked cop who's on holiday from the force in order to earn a bit of money on the side by getting the hitman for some yet some other crooks.

Antonio Isasi direction is great. Thru out the first part of the film we learn about the characters but we don't really get to know them too well, and I was kinda afraid Isasi would leave it that way. Films like that can be all right as they'll offer a more cynical approach to film-making and a opposite way than the often overly sentimental ordinary films that need a happy ending. The problem is those films tend to become too cynical and leave the viewer indifferent to the characters. Well, not so Antonio Isasi's film; Two thirds into the film he makes a change. But I'm not gonna tell you any more about that you need to watch this for yourself! Hah!

Everyone in SUMMERTIME KILLER is great acting wise. Mitchum is a hitman but he doesn't come across as a psychotic manias as those killers often do on film. And Malden's portrait of a bent cop isn't what we're used to either; there's no one way or the other here. Everyone in SUMMERTIME KILLER is bad except for nice Olivia Hussey and yet they're still somewhat likeable characters. And even nice Loivia isn't as polished as one might think; she fucks her school professor altho she no longer loves him. How radical! (well, if one expects a polished do-gooder anyway). And Olivia Hussey, what can I say but ohhh...
You wonder why Chris Mitchum didn't leave his wife and kids and stick with Olivia. xD

For a long time SUMMERTIME KILLER was difficult to find as the old video versions came out long ago and there was not DVD release, however a couple of years back Triple X Film over in Thailand put it out as part of their "World Movie Legends" series (which also includes spaghetti westerns, Euro crime, and Bollywood classics!). The print is fairly good altho not perfect. It's obvious it's a print which has been shown more than once at cinema screenings but personally I kind of like that you can see it's a print with some history. Shock! Horror!! A film fan who isn't a FORMAT fan before he's a film fan and who doesn't go overboard with critical adjectives if a print isn't 300% more perfect than when it was made back in the day!?!?!? How obscure! How bizarre!! How anti-establishment!!! What a wildman. Hahaha.
The print is also widescreen and carries the original English audio track (plus a Thai dub and Thai subs if for some reason you would like an surreal dimension to your viewing!). The film was also released on a reg. 1 DVD recently but I have no info on format or quality of that DVD. It's released as a double bill with another film. Do your own homework, LOL. You can get the Thai disc from TK WORLDWIDE which is an eBay store in Thailand run by an American who lives there. It's only 12 dollars including postage. Go here.

If you're a follower of my other blog (the one where I cover all things trashy Filipino 'Nam war style) you'll have seen my mention of Andrew Leavold's brand new Chris Mitchum interview. If you haven't go here.

It's a very long interview and I cut out some of what Mitchum said about SUMMERTIME KILLER (there's more in the interview tho, you'll have to find that yourself):

Chris Mitchum:
So they flew me up from Houston to New York to have lunch, they gave me the script, told me about the project - it was called Un Verano Para Matar - Summertime Killer - and they flew me back down and offered me five times what Duke was paying me. And I said yes before I read the script. And it was a great script, we had Karl Malden, Olivia Hussey, Claudine Auger, Gerard Barry, Raf Vallone, a great cast. And yeah, in L.A. I went to a cast interview, and the casting director looked at me and said, "Oh, you're THAT Chris Mitchum." I said, "What do you mean?" And she said "I can't cast you because you starred with John Wayne."

Andrew Leavold:
And that's how you found out!

Chris Mitchum:
Yeah. So I went off and did this film in Spain, and I came back, and again I couldn't get an interview. The guy who did the stills photography on the film called me up and said "I would like to send you a script. The producer contacted me and wants me to get a script to you. Would you be interested in coming back to Spain?" I said "Yeah, sure." So I went back and I found out that Summertime Killer was the biggest-grossing film in Spain's history. It won something like seven Spanish awards, and I was a major star in Spain. My second day there I got offered another film in Spain, so I think, "Screw this," I go back after the first film, rent out my house, pack up my family and move to Spain for three years. And everything I did there, when Franco was alive, I mean Rosso [?] was living north of Barcelona, Eastwood was shooting all of his Spaghetti Westerns down at Almaria, it was a happening place. All the stuff I did there was being exported to Asia, and it turned out I was a big star in Asia. There was Eastwood, Bronson, Alain Delon and myself. I mean, Alain Delon was always number one. And the other three of us were two, three and four depending on who had the latest release. So I started getting job offers over there, and that's when I moved back to the United States, because I figured, what the hell am I doing living in Spain and working in Asia. And I wanted a hamburger and a milkshake.
So I went back there and I started doing stuff, the first one being the one in Thailand, so I started working there a lot. And the one in Thailand, it was the first… actually, I think Summertime Killer was the first film Olivia Hussey did after Romeo and Juliet. Because that was so successful over there, they brought her over to star in H-Bomb.

Andrew Leavold:
So the producer said, "Let's, get lightning to strike twice. Let's get Olivia Hussey in here."

Mitchum:
I guess so, yeah.