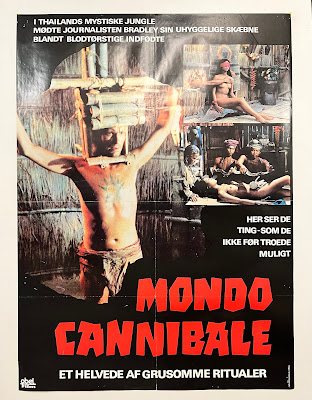 Yesterday, I posted this poster for MAN FROM DEEP RIVER (or Mondo Cannibale as it was called in Denmark for some odd reason) on facebook. Directed by Umberto Lenzi in Italy, 1972. If you look carefully you'll notice one tiny boob. That boob got me banned from facebook! Well, a 24 hour ban that is. Very annoying. But of course, it is a very nice boob.

I just noticed that one of the YouTube uploaded versions of BROTHERS IN BLOOD has now been taken down. Instead of the video you now see this interesting disclaimer:

Fair enough if Bo Svenson doesn't want his film uploaded to YouTube. However, I find it odd that he would ask YouTube to remove the shorter edit of the film but not the long uncut version. That kinda does not make sense. Or could it be that Bo doesn't actually mind his film being on YouTube, but he just doesn't want the short edit as it's not the right version as seen from an artistic viewpoint? o_O

All very odd. I should of course make a disclaimer of my own: I have nothing to do with any of these uploads. I just link to the film on YouTube.

The old post is here and you can still watch the Italian version and the trailer. If you like the film I also highly recommend the German blu-ray edition. Uncut and in English. Info here. I see the Austrian shop in my link has a few copies left.

Not a lot of Danes have heard of Lars Bloch (also a Dane) but to most fans of Italian genre films he is ... also pretty obscure! And that's why it would be pretty cool if the people behind this trailer would get cracking and release the documentary film! The trailer was posted on YouTube by its director, Dario Cioni, in 2019. Hopefully they finished shooting enough footage of Lars Bloch as he passed away recently. Back in March I posted about having ordered Robin Bougie's Gutter Hunter #1. It was released late last year, and lo and behold the editor is already cranking out another issue!! Amazing!!! And these issues are by no means low on page count or low on well researched and informative text either. The first one was a 100 page issue, and I think it was mentioned on fb that this one is also a 100 page mofo.
12 dollars + postage.

I don't know if FAB Press is going to sell these as well, but even if they are I'm not going to order it from them. Last time I had to cough up 44 (forty-four!) dollars in total for No. 1, thanks to FAB Press insisting on gluing a customs form on the envelope. I wrote and asked them not to but obviously they simply haaad to slap that fucker on the envelope. Living in the EU meant I got slapped with extra fees in the form of VAT and postal service fee. In total: 44 dollars!!! Anyhoo, it's water under the bridge and I just hope they next one goes thru without any hassles.
EDIT: I ordered this issue directly from Robin's webshop and mentioned the import problem in the comments' box, and he promised to send it in a plain brown envelope. Way to go, Robin!

If you're too lazy to scroll down to the old post you'll find it here.