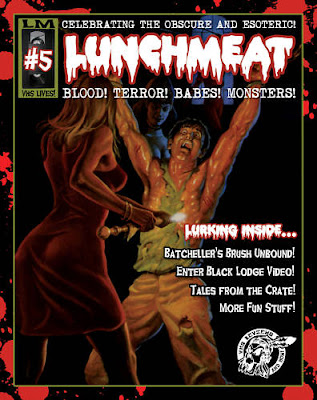 The new issue of LUNCHMEAT, one of the sadly last horor film fanzines, is on the street! I've got the previous 2 issues (I was too bloody slow for #1 and 2, grrr) and they're a good read. Support this mag! If the last few fanzines dissapear who's to say if any new fans are gonna be bothered with putting out new ones at all! :-(

PS: they state in the postage fee section that postage to "the rest of the world" is $5 but I've just ordered it thru eBay and the postage is only $4 ($10 in total).


Sales pitch from the editors:

You read right! Issue # 5 of Lunchmeat is ready to be consumed!

We’ve piled the meat high with LM #5 with in-depth reviews of hard-to-find flicks such as Jennifer, The Jitters, Night Terror, Thou Shalt not Kill… Except, and Black Devil Doll from Hell along with a heaping helping of other blood-encrusted cinematic treats that are sure to stick to your teeth! Also lurking within the pages, we have an interview with Tony Riparetti about his prolific career as a B-movie film composer and his many collaborations with low-budget maestro Albert Pyun.

Painter extraordinaire Keith Batcheller candidly tells about his career hammering out video covers (House of the Long Shadows, The Tomb) for the releasing companies in the 80s. We’re also proud to present an interview with Black Lodge Video out of Memphis, TN: a rental store that’s sure to induce time travel, hurling you into VHS days gone by. Speaking of time travel, we've also dug up a bunch of Horror vinyl for you nostalgia hounds to chew on in what we like to call Tales from the Crate! Dig those groovy sounds!

Wait… There’s more?!... Much more! Rob Hauschild is back with a slimy box of tapes pulled straight from the trash; Heather Drain shows us she knows her shit when it comes to 80s music videos (and the 80s in general) with a review of Vestron Video’s Picture Music, and Putrid gives us his totally amazing one page comic: The Birth of Slithis! And, as always, the Crossword Troll has a challenge for you in the realm of Slasher flicks. Defeat him, and you shall win prizes. That’s right: PRIZES! Fantastic ones! We’re talking VHS tapes and stuff!!

What other video vittles and forgotten treasures await you in our newest issue? Guess you’ll have to grab one…before it grabs you!! Keep those eyelids peeled and glued, kids! Hoooo-haaahhhhh!!!

If you have a subscription already, you rule, and your copy of the new issue is on its way to your mailbox! Get stoked!

All you other voracious videovores can mosey on over here to grab your copy!
LUNCHMEAT # 5!!

The site linked up above is still relatively new, so if you have any trouble with it, please check us out over on eBay. Here's another link for that:
LUNCHMEAT # 5!! on eBay!!

Issue # 4 is still available, but going fast. And we’ve got some shirts now. Shirts that GLOW-IN-THE-DARK!! (available only through eBay at this point!) Limited Quantities were made, so get ‘em while the gettin’s good!!

If all else fails, please forward your PAYPAL payment to LunchmeatVHS@Gmail.com

Here's a price breakdown for all you tapeheads!

Please be sure to let us know which issues and how many of each you'd like when you send your payment. That's info we need!

If you have any questions about the zine, have a rad video to share or just want to yell at us, contact us at LunchmeatVHS@Gmail.com

NEW Documentary on the guy who made MEN BEHIND THE SUN 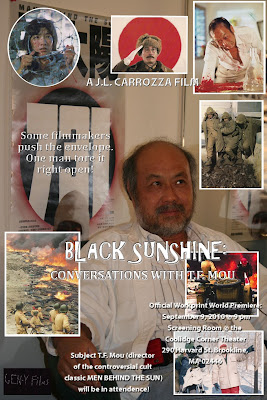 About a year ago I wrote about the 20 minute documentary short film CONVERSATIONS WITH T.F. MOU, directed by Dvdmaniacs member Jules L. Carrozza. Of course, I'm sure you're aware T.F. Mou is the infamous director of MAN/MEN BEHIND THE SUN, BLACK SUN: THE NANKING MASSACRE (Man Behind the Sun 4), LOST SOULS, THE TEENAGER'S NIGHTMARE (from Criminals 5), etc.

The film is available on YouTube (a legit upload as it's by the director). But lo and behold, now Carrozza has done a new documentary about T.F. Mou entitled BLACK SUNSHINE: CONVERSATIONS WITH T.F. MOU. And this time it's a "real" feature film. The trailer certainly looks awesome! There's gonna be a screening in September but needless to say it's not gonna take place in the cold, damp and forsaken outskirts of the world where I'm located. :-(
(if you watched that Motörhead short film I posted yesterday: That's exactly what it's like living here!!!).

But there's really no need for weeping (much) cos Carrozza is putting out the film on DVD already around Christmas. Just like the first film this one is made as an underground film with whatever limited financial means Jules has been able to scrape together and unfortunately this means we won't be seeing a "real" DVD release.

The problem is basically that Celestial won't allow the use of film clips unless you pay them (and apparently pay them WELL). I find it odd that they don't see the commercial potential in getting their films presented in a good documentary about one of the old Shaw Brothers directors. I'm not gonna go into a longer rant about this (cos there's a LOT to rant about in this regard) but Celestial is NOT an easy company to deal with. The mere fact that they won't allow Cantonese audio on some of the reg. 1 DVDs (altho Canto is often the intended dialect) speaks for itself. In short, Carrozza is gonna release the film on dvdr and let it fly under the radar. Well, works for me! (flying under the radar is the ONLY way to fly anyway, if you ask me. LOL). Rather a dvdr than not seeing the film at all or only getting a YouTube upload.

If you'd like to see the old docu go here. And you can read Jules' posts (on Dvdmaniacs) about the film here.

Here's a clip from MEN BEHIND THE SUN but if you're screamish you might wanna pass it by.