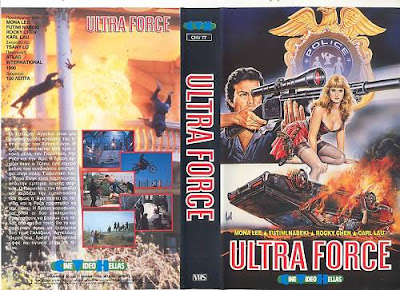 I've just won the awesome... the amazing... the uber entertaining... shoot 'em up... gun them down... and then shoot 'em again... "GIRLS WITH GUNS" epic KILLER ANGELS (1989) which stars Moon Lee. It's completely on level with ANGEL 1 & 2 (aka Iron Angels 1 & 2) and a much better sequel to that series than ANGEL 3. I've had the unsubbed VCD for years and years and have watched it many times cos the storyline is cartoon-like, you don't really need to understand the dialogue. A couple of years back I got an English dubbed bootleg DVD of the film but now, at last, I've secured an original VHS of the English dubbed print. Yay! I've lost this release before when it went for big bucks but tonight I was the only bidder! Awesome!!

PS: don't get confused by the "Greek" title, Ultra Force (which incidentally is the alternative title for ROYAL WARRIORS in Germany and Denmark!) this is indeed KILLER ANGELS. 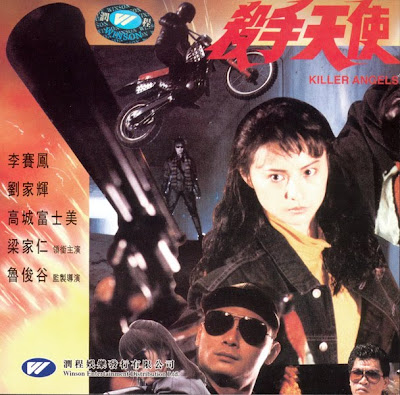 The old HK VCD (in Cantonese/Mandarin, no subs)
Posted by Jack J at 10:54 PM No comments: 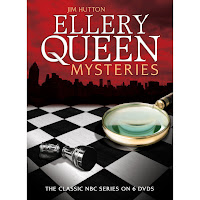 I've just discovered that the complete Ellery Queen Mysteries series has recently been been released as a 6 disc DVD box set! The box contains all 22 episodes plus the pilot "Too Many Suspects".

I used to watch this as a kid in the mid 70s but have never had a chance for a re-visit so this is pretty cool. I have no idea if the show holds water or if I'll still like it but I'm definitely gonna order it.

Someone on Amazon.com wrote an informative review, you can check it here.
Posted by Jack J at 9:41 PM No comments: