Argh, please kick me in the head the next time you see me! I deserve it. My gawd, I put off buying this DVD because of rumours that it was a terrible print and cut too.

I learnt about the DVD when it came out bloody two years ago and I've left it sitting on the shelf at DDDHouse until now. And now I discover it's most likely fully uncut and altho not a perfect print then at least better than the two FS video tapes I've got!! Argh!!

CHINA WHITE was directed by Ronny Yu in 1989 and shot on location in Chinatown in Amsterdam. The film was made in two versions; Ronny Yu's director's cut (i.e. the international version) plus a version for the HK home-market which contains an extra flashback scene. The film was shot in a mix of English (mostly) and Cantonese (and a little bit of Thai). The HK version was then dubbed into Cantonese (in the scenes where Chinese characters speak English to each other in the international version) and a fairly long flashback scene was added. To watch the film in Cantonese is NOT an advantage as the dub is pretty crappy and out of sync! Russell Wong, Andy Lau, Billy Drago, Shing Fui-On are in the movie plus a bunch more and lots of Gwilos.

The HK DVD looks fully uncut to me but I haven't compared the many violent scenes with the international version. There are many shoot-outs (it was made in the heyday of the heroic bloodshed genre) and there's also a beheading.

Unfortunately, the director's cut has never been released on DVD, only on VHS. I have two video versions from the UK and Denmark. Another rumour is that the UK tape is cut in a "Naked girl gets shot in the chest and you see her blood soaking boobs" scene. Well, more baloney! I compared the scene with the Danish and UK tapes and all three versions contain the exact same version. 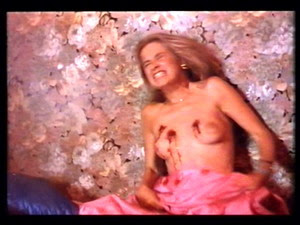 This is the brief scene that's supposed to be cut out of the UK VHS. I've just checked the BBFC site and sure enough they say they've cut out 3 seconds of the film. I've timed that sequence and it runs exactly 3 seconds! Very strange. And it is definitely the same video release from the same label and with the same copyright year info (1991)!!! So what happened? Did the BBFC order the 3 seconds out of the film (I'm told it's the "blood on naked boobs" that doesn't go down well at the BBFC headquarters) after which the video label kinda just said "Arr bugger it, we'll just leave it in there, they'll never know!". Or was it a mistake? Did the entire batch of tapes get released uncut or was it only some of them? Maybe we'll never know. Uhhhhh (said in scary voice). xD

The tapes are FS and too dark. The DVD is letterboxed, has a better, brighter picture with much more info on the left. HOWEVER, some picture info at the bottom has been cut off. Someone on ADG suggested it was because the video label (Kam & Ronson) were covering up burnt-in subtitles. I don't know if this is correct. Obviously this is annoying but the missing picture info is very little and it would be daft not to check out this entertaining film just because of that. And even with the bottom missing it's still a way better print than the two video versions (but of course it presents a different edit of the film so you'll still need a VHS for the director's cut).

I've seen the film a handful of times thru out the years (I bought the UK tape as far back as sometime in the early 90s!) and it's definitely recommended viewing (and the DVD is mega cheap from DDDHouse). 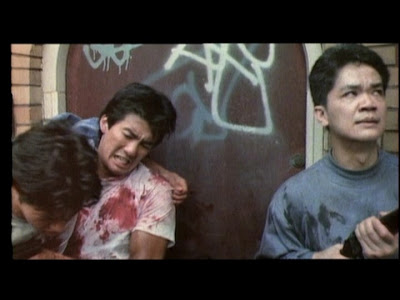 The screen grabs are from ADG and thanks goes out to the two uploaders!
Posted by Jack J at 4:38 PM No comments: