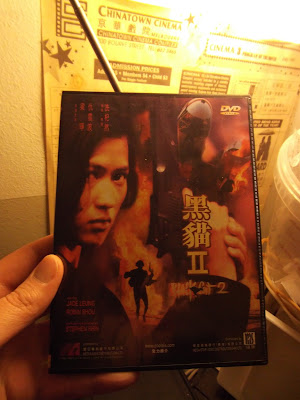 Anyhoo, while the first film is a direct remake of Luc Besson's French film NIKITA, the sequel is a film all of its own. I remember when it came out 20 years ago, nobody - as in NOBODY - had anything positive to say about the film and, uh, maybe I bought into that notion a bit. I remember watching the film many years ago and disliking it not least because I thought there were simply too many gwailos in it. LOL.

It's been a number of years since I watched the first film so this time I was able to watch the sequel as a stand alone film and quite frankly I enjoyed it quite a bit. No, it's probably not all that well written in the plot department, and no, the main character of the film, the "Black Cat" aka Erica, isn't even really the main character in the film. She's so two-dimensional that she comes across as a cartoon character, no depth what so ever.

What saves the film are the action scenes, the shoot-out scenes and the fight scenes. And they come aplenty. As I said the first film is a remake and maybe because Stephen Shin & Co. actually had to come up with a plot of their own this time they kinda forgot what kind of character Erica is (a hitman). Instead they turned her into almost a cyborg. If part 1 was Nikita this film is Terminator 2!!!

The ending is terrible but, hey, that's just Hong Kong for ya. But don't worry, there's two more sequels, BLACK CAT IN JAIL (2000) and THE BLACK CAT AGENT FILES (2003). Part 3 is right out terrible and part 4 only exists on unsubbed DVD (after having owned part 4 for something like a full decade I still haven't bothered to watch it).

I highly recommend part 1. It's a better film than the film it remakes! Part 2 is recommended for those of you who are able to accept a wild action movie with a shit plot. Forget about part 3 and 4 and watch part 1 again.


PS: The poster in my photo is an old poster from one of the Chinese cinemas in Melbourne (the poster is now full of stains from the coffee maker next to it). I actually watched the first BLACK CAT there in the early 90's.