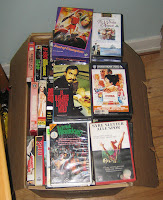 Henrik Larsen of Obskuriøst magazine is selling out of his collection of rare video tapes. Quite a few German peplum tapes (in German) and horror movies (in English) and then some. Go here. Write for info on prices (I can't see an email address but you can use the comments section).

(click for bigger scan)
Posted by Jack J at 9:11 PM No comments:

Last of the Zombies

Hey hey heey!! I finally got hold of the Japanese video release of Bruno Mattei & Lucio Fulci's big masterpiece ZOMBI 3 (Japanese title: SANGUELIA 2). Awesome!!! I've been on the lookout for that one for quite a while. So what this means is that I now have the video version of ZOMBI 3 on video and the DVD version of ZOMBI 3 on DVD - whereas most of you losers out there have to settle with Media Blasers' or Another World Entertainment's cut 'n' paste DVD version which basically means you've got the video version AND the DVD version all in one*. Video-on-DVD, hahaha. 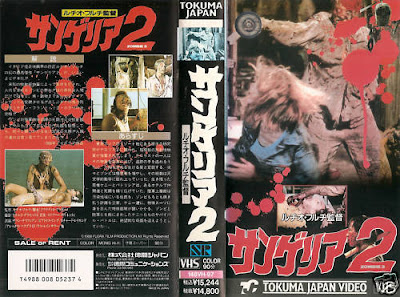