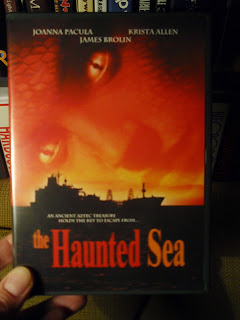 Anyhoo, we're in true Corman territory as the budget could hardly have been more than a couple hundred dollars. A ship crew runs into a big ship floating adrift and needless to say they board it to see if there's any goodies on board. It turns out there's heaps of gold and shit but also... an angry Aztec monster/demon! However, I swear the "Aztec" monster/demon looks like fucking Minya, hahaha (you know, from SON OF GODZILLA). :P

But don't let the budget or Minya fool you, the film is totally entertaining and great fun. Yes, we're in clichéd territory; yes the character development was probably written on the back of a matchbox, yes there's even stock footage from some other movie, yes the black guy dies, but as they say in dubbed kung fu films, "but still!"... I had great fun with THE HAUNTED SEA.

Fans of old genre cinema will recognise Don Stroud who's been in tons of psychotronic films and TV series going back to the 60s. He was in COOGAN'S BLUFF and the nasty DEATH WEEKEND, and heaps more. Why some unknown chicks are mentioned on the cover while Stroud is ignored is a mystery to me.

There's some gore here and there but don't expect a full-blown splatterfilm. The leading lady shows us her boobs about 10 times (the film kicks off with a shower scene). James Brolin is in there, too (i.e. the film, not the shower scene).

I bought the reg. 1 release from New Horizon directly from Corman's eBay store ($13 + postage). Apart from the film's trailer the disc is completely barebone and to mock us even further it's presented fullscreen.
Posted by Jack J at 8:57 PM No comments:

The Ripper is dead. Long live the Ripper. 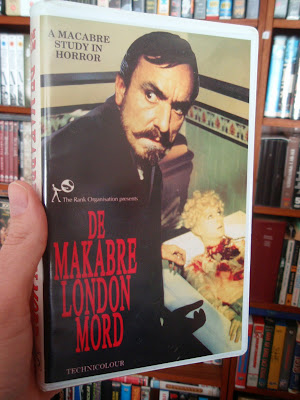 First off this afternoon: Hammer's HANDS OF THE RIPPER from 1971, directed by Peter Sasdy. I thought it was quite good. The urge to kill lives on in Jack the Ripper's daughter. Quite gory for its time. Phil Hardy's "The Encyclopaedia of Horror Movies" calls it "arguably the last masterpiece produced by Hammer". I quite liked the fact that it doesn't have a good guy character.
Posted by Jack J at 5:14 PM 1 comment: