Too wild for the grave 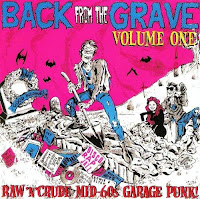 I bought these two fine platters ("Back From the Grave, volume one" & "Teenage Shutdown: GET A MOVE ON") a couple weeks back and they've been spinning almost every day since then! This is just awesome trashy and wild punk from the 1960's (altho of course it wasn't actually called "punk" back then). Both records were released by the good, good people at Crypt Records in Hamburg (which is basically American Tim Warren who's been running the label for many yrs now, and Dirk running the Crypt store).

I already had a few volumes (both on cd and vinyl) of the "Teenage Shutdown" series so I knew the new ("new" to me anyway) volume would be ace - and it most definitely is! But holy fucken mackerel why didn't I start buying the "Back From the Grave" series sooner!!?? @_@ Me so stoopid! This is just one awesome track after the other!

In Denmark, when people say they listen to "60's music" it usually makes me feel like gagging violently cos what they really mean is they listen to The Beatles, The Rolling Stones, Jimi Hendrix, The Who, Simon and Garfunkle, and maybe The Mamas and Papas. And that's usually IT! It's like saying you love music from the 50s but only listen to Elvis and Buddy Holly! There was so much more!

I think the problem is many people often reckon that because something wasn't as *popular* it probably means it wasn't as *good*. Well, being a fan of psychotronic cinema you bloody well know those two don't always go hand in hand. Actually, I'd say more often that not they don't! The bands that got famous were often the ones that were "out there", sure - but maybe not AS "out there" as they COULD have been! 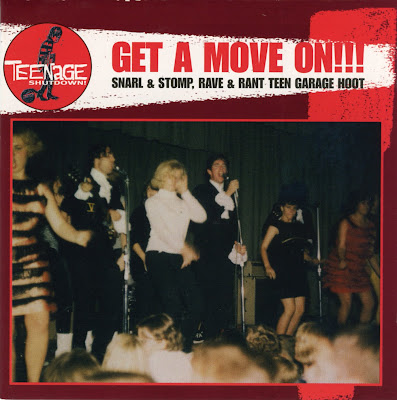 There were about 3 billion tons of bands that were much wilder and crazy than the bands I just mentioned. But then again maybe that's one of the reasons why they didn't make it; They were TOO BLOODY wild for ordinary consumption (at least in their day)!! Bands who wanted to be the new The Kings and had the wildness but maybe not the luck or money (or even skills) to quite make it.

Like the many Elvis-wannabees in the 50's who wanted to be the next "Elvis" and recorded their take on rockabilly but did it wilder, crazier, louder; But like I said it was often to a world that wasn't ready for it and thus didn't embrace them as much as they could have. Or at all. Most of those bands & artists only cut the one 7 inch single - but whatta a single!! Or maybe they actually managed to put out two, and at the utmost THREE singles before they disappeared into the abyss never to be heard from again. Well, until Crypt Records dug them out of their grave! LOL.

I'm certainly gonna try and get hold of all these records, preferably both on CD and LP. I believe all the "Back From the Grave" volumes are still available from Crypt both on vinyl and cd. The "Teenage Shutdown" series is a different story, unfortunately. Most of the vinyls are gone and some of the cd volumes are OOP too. Maybe they became more popular because Tim Warren spent so much more money on them. Apparently, a lot of the other compilation records are crappy sounding shit dupes directly off scratched singles or even off badly sounding cassette tapes.

The "Shutdown" records were made using a very expensive professional record player with a needle that cost something like 6 billion dollars! The sound is perfect!

However, I wrote to Dirk at the Crypt store when I ordered the two CDs and he said they're gonna reprint ALL the vinyl volumes of "Teenage Shutdown" this year! Totally awesome news indeed! The CDs may take longer (still according to Dirk).

Anyhoo, I found two of my fave tracks from the "Back From the Grave" vol. 1 record on YouTube. Check them out (and play 'em loud!).