Thanks to Lars Jacobsson I will soon be the very happy owner of this SUBTITLED Hong Kong PAL VHS release of the greatest film ever made. Yes, obviously I'm talking about WOLF DEVIL WOMAN!!! But you knew that didn't you. Obviously, nothing comes free in this world (except hatred and agony) so Lars is getting something very nice in return but that's fine. As long as I get this!!! 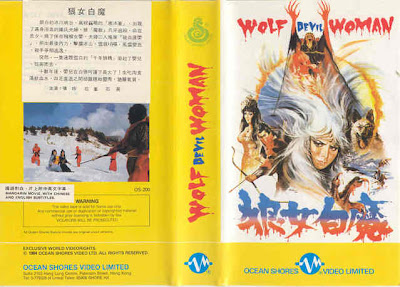 I don't know how many times I've watched WOLF DEVIL WOMAN through out the years, I lost count long ago. If there's ever been a film to which the term "no-holds-barred over-the-top wild & crazy batshit cinema" applied then this is it!! The version I've had in my collection for the last few years is the HK released VCD which comes with two audio tracks; dubbed into English (!!!) and Mandarin. I have never before or after come across a HK VCD that carried the English dub track. Anyway, it'll be fantastic to own a proper (legit) subtitled release (I may already have a bootleg from Trash Palace, LOL).

The very first time I learnt about the existence of WOLF DEVIL WOMAN was when the premiere issue of "Asian Trash Cinema" came out in 1992, and Thomas Weisser wrote in his foreword:


"I remember the happy day when I first discovered joys of Chang Ling's Wolf Devil Woman. It was a cold December afternoon in 1985, during a Saturday afternoon blitz of video stores, that I came face-to-face with the unusual Ocean Shores package. Even though the video tape was stickered as Martial Arts, it had been misfiled in the "Horror section" (obviously, the store didn't know what to do with this genre hybrid). And I decided to take a chance. I mean, "What the hell..." Right?
That night, as I watched the movie, dumbfounded, with a group of friends, I kept raving: "I'm seeing it, but I don't believe it!" Wolf Devil Woman was frenzied cinema. Its vivacious attitude hooked me. I became possessed."
[from ATC #1]


I must admit Weisser's description is spot-on! "Frenzied cinema"; too right!!! That scene where the wolf woman cuts herself in order to kill a fire with her gushing spraying blood... is just INsane!!! And I would have a big smiling smiley here if Blogger provided one.
Posted by Jack J at 6:51 PM 27 comments: